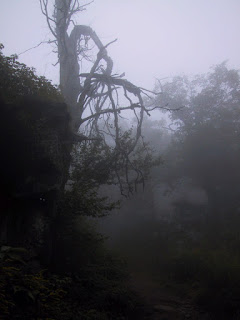 Have you ever been lost in a dense forest? Do you recall what it felt like? Walking down an unpaved path, trees and foliage surrounding you, with only flickers of sunlight breaking through the canopy above. Chilly, wet, and above all, silent. Almost uncanny, as Freud might put it- evoking vague notions of fear (and possibly even dread). Walking alone through uniform scenery, repetition heaping anxiety on your already thinly-stretched nerves, getting more lost the deeper you go.

And that’s when you hear the sound.

A crack, or a scuttle, something tracking through bushes. Maybe it’s behind you, or right next to you, so close you can almost hear breathing, or a low growl. The sound, so alien and out of place in the deep silence, send chills down your spine, and causes your already nervous heart to race. You look for the source, but see only more shadows and unending green. You hear it again, close this time, and you quicken your pace, forcing yourself not to run, but wanting nothing more than to be away from the sound, and whatever invisible “monster” might be causing it.

Later you might find out it was just a mouse or chipmunk- hardly threatening as an afterthought- but at that moment, when the silence has been shattered by a sharp noise, at that moment when your senses cannot identify what you heard, the fear is very real, and the anxiety over some unseen force is at its most powerful. The ambiguity is the root of fear itself, and the cause of not-a-few panicked flights deeper into the unknown.

That ambiguity is also the root of yokai.


Ambiguity and yokai are almost inseparable. From the earliest legends of monsters in the forest, to the ghostly eyes that follow you around a decrepit house in modern Osaka, much of Japanese folklore finds its origins in the often ambiguous world of the unknown and unidentifiable. So strong is this belief in the power of the unknown, that it has contributed to countless legends and exaggerations of typically mundane things, until the legend has completely overtaken the reality.

This is not a road easily traveled, but one that is worth looking into. Hopefully after we are done here, you will be ready to take those first steps into a larger world. Because once one begins a trip down the spooky world of yokai, it’s hard to turn back, so sometimes a bit of “outfitting” is in order. You have been warned.

One of the major points that I stress during lectures exploring the nature of yokai and their ambiguity, lies in the notion of context. Many of the monsters we read about today were the product of “exaggerations” by the people who directly interacted with them. While time and science might have blown away some of the “supernatural fog” that once shrouded the idea of yokai, these monsters and their supernatural powers were seen, at least at one point in history, as both natural, and commonplace.

The origins of this concept lie somewhere in the intersection of the “Three Worlds of Japan,” or the idea that the physical world we reside in is only part of a greater whole. In addition to our own world, there is also the world of spirits- where gods and departed humans interact- and the hidden world- a place where the things we don’t see exist, and “bleed over” into physical reality.

Part of this belief in overlapping worlds is born out of the idea of Shinto itself. According to native Japanese beliefs, everything in the world has a spirit, and harmony is attained only when all the spirits are happy and interacting with minimal conflict. An imbalance in the harmony can lead spirits to become angry, and angry spirits have ways of messing with humans until they can be properly appeased. This closeness between man, god and nature (one of the hallmarks of Japanese religious practice) is carefully monitored and maintained- a sort of symbiotic relationship- lest an incident like the retribution of Daijo Tenjin be repeated. (I will introduce you to that man in a later essay, but there’s no reason not to look him up now.)

The idea of the “hidden world” was especially powerful. The existence of “supernatural stuff” that lurked outside our perception was both terrifying, and humbling. As it was, much of this hidden world lore emerged from both a general fear of the unknown (where what you didn’t see/understand actually had the powerful to cause harm, and was thereby dangerous), and the [youthful] curiosity of the existence of a world we want to see. As Michael Foster wrote: “The otherworld of yokai is just one manifestation of a more fundamental longing for something beyond what it immediately visible and available.”  Or, put plainly in modern terms: vampires exist because we want them to.

Take a moment to consider the following: you are a peasant farmer, living in a village in rural Japan, circa 1000 AD. Your life revolves around cultivation of the rice crop, you have a small family, a few worldly possessions and both you and your neighbors keep to your community. An altogether mundane, if typical, existence for a farmer living a millennium ago.

Then one day you return from the field to find your house has been ransacked. Some crockery lies broken, a chair has been upturned, and worst of all, your food has been thoroughly raided. At first, your mind springs to burglars- you recall a report that morning of a traveling pilgrim passing through town. But there was no sign of forced entry, aside from a small rip in the reed screen that comprises the back wall of your house, not even large enough for a person to squeeze through. You rush off to tell the neighbors about the “theft,” only to find they returned to similar experiences. The town rushes about, seeking answers, and discovers that one elder saw a group of foxes running into the forest, not long after the “pilgrim” passed through. The town eventually comes to the conclusion that the pilgrim was likely a fox himself, having assumed human form (as foxes are often known to) to scout the village, and signal to his fellows when the coast was clear. You and your neighbors resign yourselves to having been tricked- again- by the wily creatures, and return home. 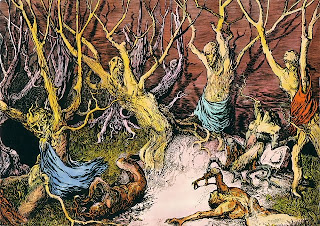 Stories like this were commonplace during the feudal periods of Japan, when folk knowledge was powerful, and spirits lurked everywhere. Many of the animals of the forest- the kitsune and tanuki most notably- and even some domestic critters- the neko-mata- were often reputed to possess powers of illusion, from shapeshifting to distraction, which they used in great effect to deceive the senses and steal food from human villages. Sharp-eyed locals would be on the lookout for these crafty fellows, lest one or more break into the village and make off with food and shiny baubles.

Of course, such notions might seem preposterous in the modern world, but back then, when science and literacy were restricted to a select few and the common farmer likely knew only what his sense and imagination could define and relativity was the rule of the day, the idea that the creatures of the forest had otherworldly powers was taken as fact. There just wasn’t any other explanation for it. If a farmer found an iron kettle on the side of the road and brought it home one night, only to find the kettle, along with his money and food, was gone the next morning, it had to be a tanuki assuming another form. If an overnight disturbance among the livestock was accompanied by missing animals the following day, then obviously one of the avian tengu was to blame. In the context of time and knowledge, the obvious- read: supernatural- explanation made the most sense, and was accepted as truth.

Over time, some of these legends evolved. Kitsune changed from tricky foxes looking to steal a chicken or two, into predatory monsters that took human form, sought out an unsuspecting “husband” from a local community, only to consume the human’s flesh on the wedding night. Loyal hounds transformed in death into supernatural enforcers for savvy men who could control their spirits. The tengu changed from crow-like goblins living on mountaintops into demonic warriors famed for their bloodlust and desire to play (fatal) tricks on the populace. But no matter the change, the idea that the forest, full of shadows and unknowable fears, was dangerous and embodied magical powers persisted, keeping villages together and strengthening the might of the kami and their servants. As noted director and animator Hayao Miyazaki once wrote: “Everyone depicts nature as charming. But it is something more fearsome. I feel we cannot forget that within our historic memory, there was a period when the forest was overwhelmingly powerful.” 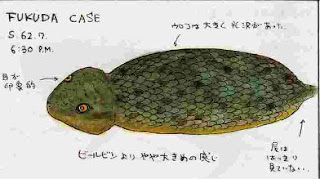 So is this open ambiguity some clever ploy on the part of the monsters? Is it the result of years of cross-pollination between legends and stories? Is is some conspiracy to make the monsters seem more real than they might be? A better question might be, does it matter? While the monsters we often see on screen and in books are easily identified as “vampire” or “werewolf” or “zombie,” sometimes a healthy dose of the unknown is needed to remind us that sometimes those disembodied noises might be more than some curious animal or falling branch. Sometimes they might be attached to something hungry and cruel, stalking you through the shadows.

Sometimes those monsters might be real.
Posted by Anime Anthropologist @ 3:37 PM