The Other Side of Cosplay

Back at the beginning of story month, I gave the following bit of advice for any first time congoer: If you’re going to hit on a girl, make sure it is an actual girl. This may come across as quite funny, but as I am about to demonstrate, it is an extremely necessary rule of thumb for any neophyte congoer.

Crossplay is essentially the art of cosplaying a character of the opposite gender. It is found often among fans of wildly popular shows and games like Kingdom Hearts, Naruto and Fullmetal Alchemist, where the cast is made up predominantly males. (It could also be said, as in he case of Kingdom Hearts, that the cast of males is rather bishounen, and thus makes crossplay easier, but you can form your own opinion on that.) In these cases, female fans show their devotion by dressing up as one of the male characters. All psychological comments aside, crossplay of this nature is often seen as normal for a con, and indeed encouraged. Devotion is frequently rewarded, often in the form of photographs and gifts of Pocky, and many of the girls who choose to crossplay say they enjoy it.

But that is only half of the crossplay experience.

A few years ago, at Anime Boston, I was sitting in the anime parliament, enjoying a rousing case involving Sakura Haruno, a ninja headband, and Hot Topic. Someone behind me shouted out something ridiculous, I turned around, and came face to face with...well, you can see for yourself: 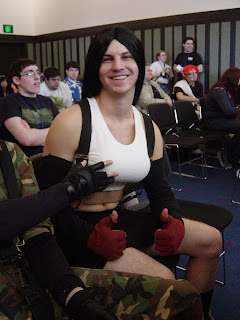 My jaw dropped. Literally. I stared at this guy until we both started laughing and I snapped his picture. It’s been sitting on my hard drive ever since, brought out only when I need to illustrate the lengths some people go for a satisfying cosplay experience.
Indeed, while many enjoy the act of females crossplaying males, many tend to look unfavorably at the opposite. Stories about male crossplay, especially good male crossplay, tend to get the “OMG” reaction, with dumbfounded expressions and a sense of total disbelief. Like in this story, which was given to me at Anime Next:


“Ok, so back at my first I-CON, back in High School, I wanna say 6 years ago, me and my friends were doing a group cosplay for Ragnarok Online. I drew the short straw and got stuck playing the female assassin. Since my friend’s dad was a Hollywood makeup artist, he did a good job on me, and I ended up getting 6 numbers from guys. And at the actual judging, we won and they asked if we had anything to say. I took the little mute bubble down from over my head and said ‘Oh, by the way, I’m a guy.’ And everybody’s jaws just dropped to the floor.”


This example is somewhat rare among crossplayers, but it does happen. Well-done male crossplay is often applauded on the same levels as well done female crossplay, mostly due to the time and effort put into the costume. In the previous example, the fact that the subject had used a professional makeup artist to full conceal and transform him into a female made his costume that much more outstanding, and within cosplay circles, effort often equates with respect.

But these situations are, as I said, rare. More often, male crossplay develops out of situations that end with “dares” or some kind of reward. Usually in these cases, the subjects are “egged on” by friends, often simply for some good natured fun, the chance to step out of one’s comfort zone, or simply for a new experience. Take the following story, for example:


So my friend is like really into Sailor Moon, but he never really had the guts to do it. So me and my other friends finally got him to dress up as Sailor Moon, but only for the Sunday, it was like a half day. So he dresses up in the morning and we hadn’t slept all night, we just spent all night messing around, so when his mom gets up she tells him that he’s going to church dressed like that, because he has to go, his parents are really religious. So he’s sitting in church, dressed up like Sailor Moon, and we decide to go to church, just to see what happens, and the priest walks by and just stares at him for like an hour.


Experiences like this are far more common when male crossplay occurs, and tend to be short lived: for maybe a day, like in the above story, or for a single photo shoot. And they tend to be more humorous than anything else. Given the penchant for cons to allow attendees a chance to cut loose, it makes perfect sense that crossplay would occur, if only for a short time, as a way of just having fun.

Of course, some male crossplayers have also developed a bit of fame...or infamy. One such crossplayer, whose tales have made the rounds, is known only by his infamous moniker “Man-Faye.” 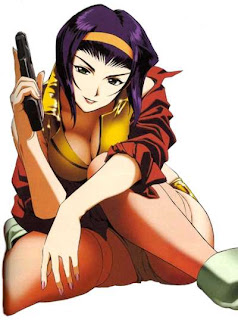 The first time I ever met Man-Faye in person was at Anime Expo the last time it was in Anaheim, I walked up, it was the entrance to the con, I turned around and in front of me was some big, hairy ass, bent over, lotioning his legs with sunscreen and I just got a face full of Man-Faye ass. That was my first encounter.


Man Faye, who is something of a regular on the west coast con circuit, is infamous for his portrayal of one Faye Valentine from Cowboy Bebop. For those who have never seen the show, Faye is a gambler, bounty hunter and conman, who dresses in a very famous, and very skimpy, outfit. She is frequently cosplayed by girls, and is the subject of much love from fans of the show...and men in general.

Man Faye takes this to an entirely new level. Known in real life as Damon Evans, Man Faye has made a name for himself by showing up at cons, like Anime Expo, dressed in the same skimpy outfit that makes Faye so alluring. And unlike the story above, he makes no attempt to “do it right.” In an interview he gave Anime News Network in 2005, he cites his decision to become one of the most infamous crossplayers as an inside joke, having been told he was “more similar to Faye than Jet.” He assembled his costume in less than an hour, entirely for laughs, and found himself swamped by fans and photographs. Since that day, he has appeared on television, his most notable appearance as a potential contestant on “Who Wants to be a Superhero,” and has made a name for himself as an advocate for equal rights. However, he also later says that he does love the amount of fan mail he gets, and the celebrity he enjoys while at cons.

This fame has not come without a price, mind you. He has been banned from Anime Expo on more than one occasion for “inappropriate conduct,” which is what led him to his crusade for equal rights. He also admits he gets a lot of hate mail from flamers who think he has gone too far and dragged the joke on for far too long. To his credit, Man Faye shrugs it off, saying that the only way to take negativity is “to own it.”

While general opinions of crossplay tend to be favorable, or at least accepted and humorous, sometimes as with anything, they can draw negative attention. Instances with Man Faye are not exactly rare, and simply by looking on his thread at Cosplay.com, you can see that some people have harsh words for him. But sometimes negativity can spring from misunderstanding or overemotional fans. Take the following story, for example.


One convention my sister was cosplaying as Draco Malfoy. She makes a very good Draco, she actually looks like a boy, mostly because Tom Felton (who plays Draco Malfoy in the movies) looks sort of like a girl. Unknown to her, theres some girl at the convention who is madly in love with her Draco, like she sees it and thinks, ‘I’m in love.’ Okay, after the con’s over, we’re back home, we see on a forum, she had posted online, because she found out she [Draco] was a girl, and was freaking out, saying derogatory things, and my sister is like “how is it my responsibility to inform you that I was a girl when you didn’t come up and talk to me and just sorta fapped at me from afar?” and she just defamed her online for being a girl.


Instances like this are by no means rare either. (Neither are female Dracos. I don’t think I’ve ever seen a male Draco Malfoy. Or a male Harry for that matter.) When it comes to fandom, devotion is the word of the day (and not just devotion as stated in the last entry), and encounters between excited fans and the objects of their cosplay eye are not always positive. As with anything that holds an emotional attachment, there always runs the risk that the wrong fan will take things too far. As shown above, the wrong fan obviously took offense to her beloved character being played by a girl. The lines between reality and fantasy, at least as far as the one obsessed girl are concerned, were extremely blurred and taken out of context.

I know that this could be interpreted, at least in some instances, as a warning against crossplay. I am not stating this at all. In fact, I do enjoy well done, and outright hilarious, crossplay. Like many fans, I feel that cosplay is something that is personal to the cosplayer, and that they should do the costume they, and, as long as it gives them fulfillment. If a guy with lots of body hair wants to dress up as Sailor Moon, he should do it. If a girl is so devoted to Aburame Shino, she should challenge herself and make it her own. Crossplay is, at its core, cosplay, and the goal of cosplay is to have fun. This is an ideal shared by many, many congoers. It is also an idea decried by many as well, who feel that cosplay should be taken extremely seriously. And, as with any opinion, there is no right answer.

So, that said, do your crossplay. Live it. Own it. And be mindful that while some may hassle you for it, there are plenty of others that will love it.

Here are a few more examples of crossplay that I have gathered this year. 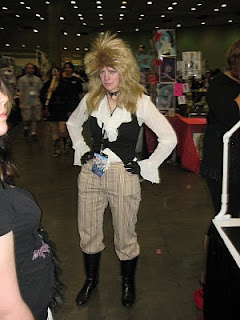 Jareth, the Goblin King from Labyrinth at Otakon '09 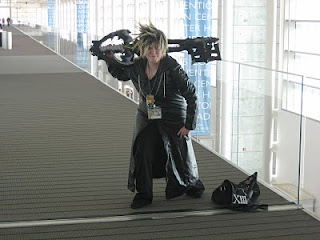 Roxas from Kingdom Hearts at Nekocon '09 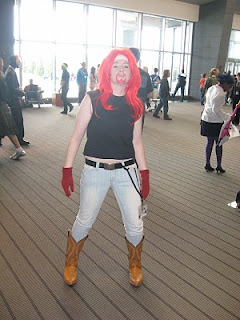 Pickles the Drummer from Metalocalypse at Nekocon '09 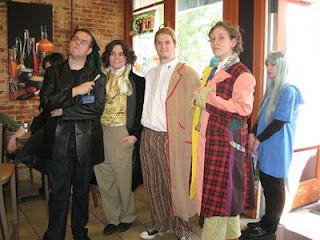 Some Doctor Who cosplayers at Otakon '09. Note the 6th and 8th Doctors are female. 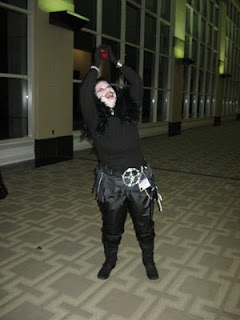 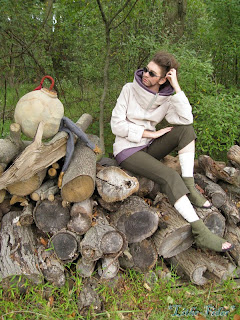