clever names and lecherous uniforms: the puns of kill la kill, round two

Based on the popularity of Kit Flowerstorm's last post regarding the clever naming convention in Kill la Kill, she's back for round two. Remember, she's trying her best to cover expenses for grad school, so check out her gofundme and contribute.

In the last post, I introduced some of the name puns in Kill La Kill, such as the puns and wordplay behind the Kiryuin family.
This time, more wordplay.

For example, the Mankanshoku family:
The characters in the surname Mankanshoku can be broken down as follows:
満 - to be full, satisfied
艦 - warship
飾 - decoration, showing off
It's a bit of a stretch, but the name can be read as "making a show of how satisfied one is (with life, with money, with food). Which is a plot point, if you recall how Mako acts when she has the Fight Club President post. Her family might be poor and badly off, but they are her family, and she manages to keep her identity as an individual throughout.
Also another note: this sort of name is a bit clumsy, and sounds uncommon; which can signify a higher social class than they might appear. 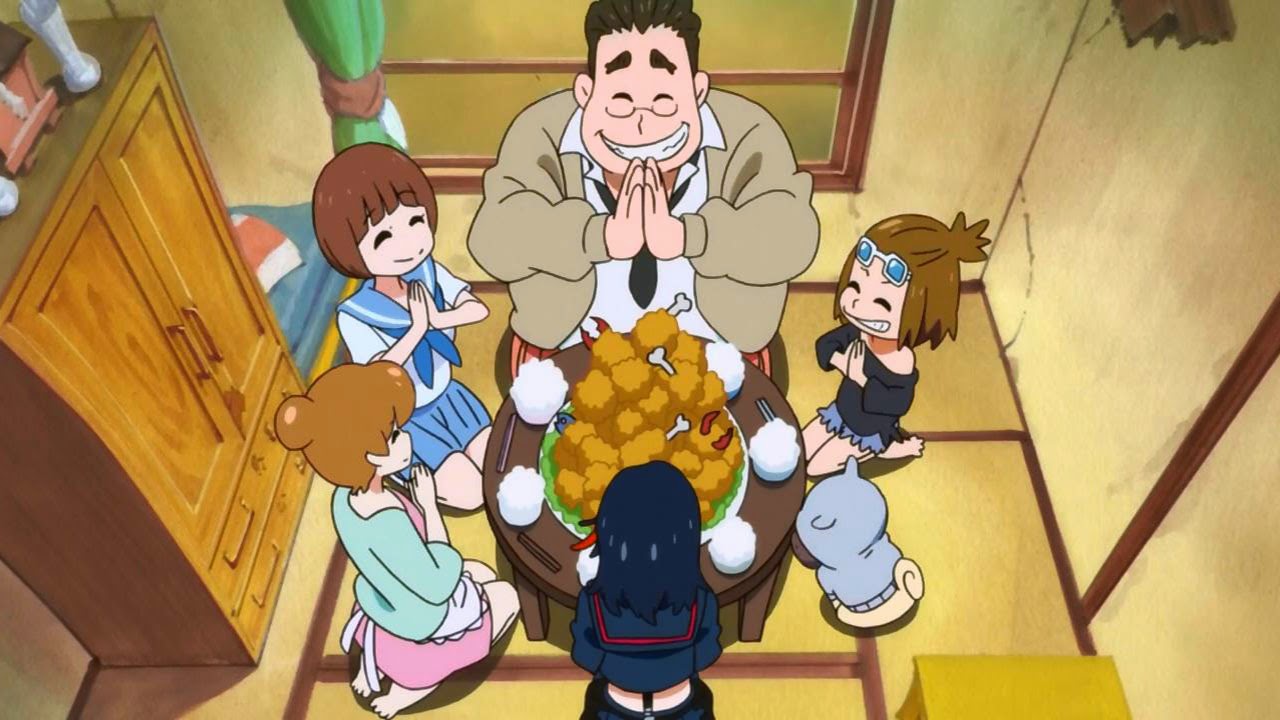 The father, Barazo Mankanshoku (満艦飾 薔薇蔵 ) - aside from the 'bara' references, partly a reference to storing up goodwill (or being a loveable pervert, another connotation of 'bara'), I want to point out that his name is entirely in kanji. Which admittedly is not unusual, but a name with six characters, all in kanji (and somewhat complicated kanji at that), was usually reserved for high class families.

The mother, Sukuyo Mankanshoku (満艦飾 好代 ) - the "Sukuyo" part is written with the characters "to like" and "to substitute". However, it can also be a food reference, as her signature croquette dish includes anything and everything (the "substitutions"), and is a sign of love, that she makes the best of what she can.
She also serves as a substitute mother to Ryuko, and the "like" character ( 好 ) uses the components of "mother" and "child".

The brother, Mataro Mankanshoku ( 満艦飾 又郎 ) - his name sounds like a fairly common male son name, but the characters for "Mataro" can mean "boy who does things again and again" . This can be a good thing - he sticks up and tries to find his sister no matter what - but he can also be doing things despite getting in trouble for it. He is also Mako's brother, and since Mako's name is actually NOT in kanji, the "mata" (again) character might also work for her too.

Mako's name breaks the pattern, because the "Mako" part is NOT written in kanji; it is written out in katakana like so ( マコ ). The trend in Meiji eras and more were for women to have their names written in katakana, because kanji-based names marked privilege; for most 1930s and onward generations, women had kanji names. But now, the trend is again to write female first names in kana, because it sounds cuter and a bit more exotic.
In anime and manga, the ambiguity of katakana can also mean tons of wordplay. Mako's name can mean "child who does things again and again" - similar to her brother's name. But it can also mean "child/girl of truth" - it is she who sticks up for friendship, even if she has no idea as to the facts of the situation she's in, she seems to be more insightful as to what people need emotionally. The name can also mean "girl who is in between" - she is a friend to Ryuko, and is the Fight Club President, but she has no part in the overall struggle unless she is forced to. She'd rather eat and hang out with her family and friends.
Mako can also be written as 魔子 - which means magical child. I'll present that one without comment. 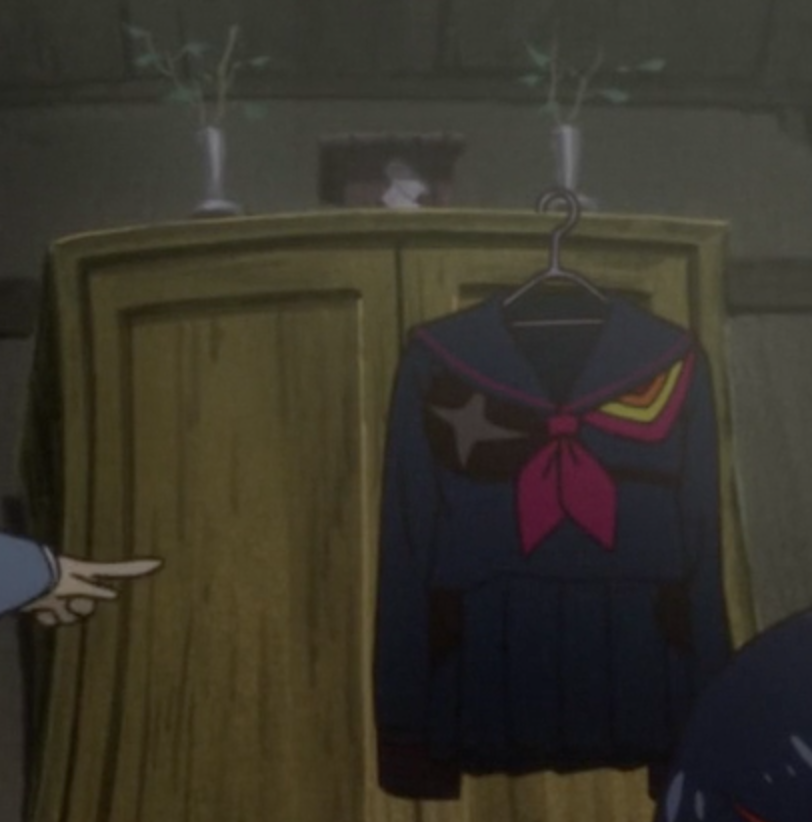 Senketsu - Senketsu's name is also a pun: Ryuko chooses his name to mean "fresh blood" ( 鮮血 ) but varied readings of "sen" can bring up "a thousand (drops) of blood", "fighting blood", or "fibers and blood". Which are all appropriate, in this case.

What about uniforms? Even the word for the special uniforms is a bit of wordplay: they are described as goku-seifuku ( 極制服 ). "Goku" in this case means "pinnacle", "very" - what in language is called a superlative, when you describe something as the best it can be, etc. I have seen it translated as Ultima Uniforms, keeping this idea. Fairly straightforward, but speaking of fibers:


Senketsu and Ryuko's trademark move Sen-i-shoshitsu ( 腺衣喪失 ) is from "fibers", "clothes", and "loss" - considering the move is to rip the Ultima Uniform off of a person and take the component Life Fibers, this works, but how to describe it in English?

喪失 (soushitsu) means loss, and it's a very common word: loss of memory, loss of forestry, anything that is disappearing; however, it also can be used in a sexual context, meaning to lose one's virginity or innocence. I have seen this described (when it is described at all in English) as "Thread Stripper", preserving the fiber use of the word, as well as the idea of the clothes being stripped off and their "innocence" lost. However, I do not think that rape connotations are necessarily implied here: I think it's more of a loss of innocence or loss of illusions. After all, the Two-Star challengers to Ryuko who  most often challenge her and lose their uniforms are usually the ones 'hiding' behind clothes - or that they are being worn by clothes, as is the case with higher level challengers such as Nui (who unfortunately, is made up of Life Fibers, but the 'stripping the nice illusion away' still stands). So stripping this illusion away can be - in the long run, beneficial. 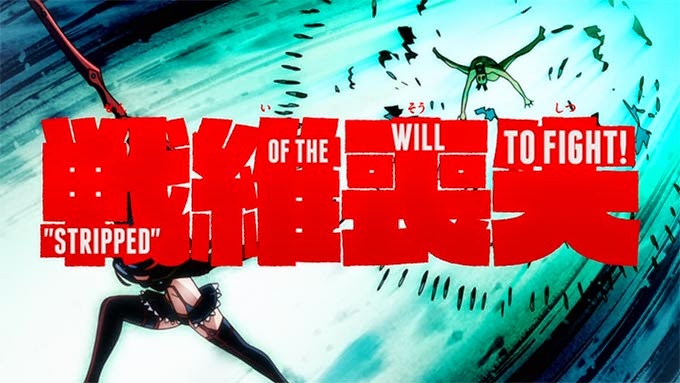 This isn't so much about wordplay as that Kill la Kill is very much in tune with shounen / boy comics' formulas. However, the main characters are girls, and the series still deals with friendship and family and relationships; and the emphasis on clothes and outfits apply just as well to the male characters also. So what might this say about strength, conviction, and possible gender roles and options in modern society?