you can thank patches and jill for this scrap

Earlier this week, I was forwarded a tweet that said:

Patches ‏@the_patches
@Studyofanime Tumblr seems to be discussing the apparent time passing during Spirited Away. What say you, scholar?

The Tumblr Patches was calling my attention to asked a question regarding how much time had passed between the beginning of Spirited Away, when Chihiro and her family first discover the park, and the ending, when they entryway is overrun, the car is covered in dust, and they speed back into the real world, her parents completely unawares of they time they had spent as pigs at the bath house while their daughter worked as an indentured servant to an old witch, a river dragon, and countless other spirits and ghostly presences. Given the family theme surrounding the movie, some of the comments were downright creepy, suggesting decades of lost time and worse “atrocities” at the hands of the “malicious” spirits.

Here’s the link, you can see what I mean.

But I think I’d like to throw some more of my two cents into this. Because, let’s face it, I have a lot of pennies in my basement that need to go somewhere.

The first thing that needs to be mentioned here, when looking at the apparent passage of time in Spirited Away, is that we are dealing with, for all intents and purposes, faeries. Fair Folk, youkai, kami, tricksters, they’re all generally the same classification of otherworldly spirit, living outside the realms of our perception, and more than willing, to put it in the vernacular, “screw with us.” The fact that they revitalized a rundown amusement park, and then “lured” people inside is the telling part: look at the fairy tales that generally follow the same theme.

Will-o-wisps lured travelers into peat bogs, where they would drown and be consumed. Kelpies did much the same, with their lovely horse bodies and incredible ability to swim. Canada has wendigos, Ireland all sorts of sidhe and little folk. Return to the isles of Japan, and you have the Jinmenju tree with it’s delicious fruit...that then tries to take a bite out of you. Mythology is replete with imagery and tales of the “other side” playing tricks on humans, presenting “pleasing” images, or stoking curiosity...then eating whoever “falls for it.” 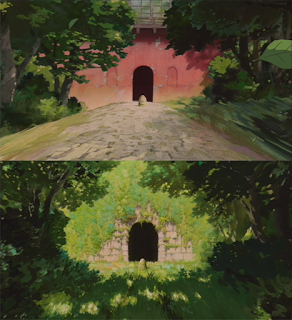 Added to that is the notion of the kamikushi, or the physical act of being “spirited away.” Again, many tales the world over have this theme: a human is drawn into a supernatural trap and subsequently whisked off to slavery, servitude or immeasurable luxury by some fey prince (more often the former, very rarely the latter- thank you Brothers Grimm). Japanese history has quite a few mentions of this as well: from the disappearance of Minamoto no Yoshitsune to train with the tengu, to regional tales of people captured by foxes, or hunted by the Onibaba and her even uglier twin, Yama-uba. In each case, the person is lured away from society, transported physically into the “other world,” and is rarely heard from again (Yoshitsune is an exception here: he came back stronger than ever. So strong, in fact, that his own brother tried to have have “spirited away” when he was viewed as a rival.)

So now we have faeries with the ability to shroud the senses, lead humans astray, and in many cases, trap them in entirely different worlds that more than likely do not follow the same laws of physics that we on Earth are subject to. In a word, everything under their control can best be described as relative. This is something we need to remember: when judging anything involved with fae, you can’t even take it at face value. Everything is relative to the place and the folk controlling it.

But I digress. There’s plenty of lore out there that speaks to the nature of otherworldly creatures playing tricks on humanity. The question here comes down to time. How long did Chihiro and her family remain in the park, under the watchful eyes of Ubaba and her cronies?

The easiest way to know would be for us to see the world they emerged into. If so much time had passed, the family, in their suddenly out of date car and out of date fashions, would stick out like a sore thumb. It would be obvious they were there for a long time. But since the movie doesn’t follow them for that long, we need to rely on what we see in the film.

At the risk of trivializing, I think this entire discussion can be pretty easily described by two very simple words: they’re kami. Disregard the wild overgrowth, disregard the dust on the car and focus on the fact that this is a bath house patronized by spirits, and run by a powerful witch. Given some of the things Ubaba does during the movie, is it really that much of a stretch for her to use her magic to cloak the entire place in an appealing illusion? Make it seem like there’s food on the table (not to mention how many of these stories use enchanted food as a way to trap mortals) and the place being in better shape than it actually is? This is a powerful kami dealing with humans. She can do whatever she wants.

So while we initially see a clean, fresh entryway, and a smiling statue greeting the characters, it’s probably more likely that the place was always overgrown, and Ubaba did some illusory housecleaning to lure the humans in. And since they were living in the spirit world that entire time, it’s completely feasible that they weren’t gone for more than a day, or even a week. Dust aside, everything is relative. Including time, space, and memory.

But what could be really creepy, is asking “why did Ubaba lure them inside in the first place?” Even if that was a standing illusion, it was meant to attract humans, serve them food, and inevitably turn them into pigs. Had Chihiro eaten with her parents, she would have become one as well. And the only reason one of the Folk would ever need pigs...

Yeah, that’s pretty creepy in its own right.

While you're at it, make sure to follow Patches on twitter: @the_patches and Jill @carouselcarouse
Note: The wendigo story I'm specifically referring to appeared in Alvin Schwartz's "Scary Stories" collection.
Posted by Anime Anthropologist @ 3:32 PM