One of the best attributes of the anime fan community is the global reach. This might sound obvious, but some people forget that these shows are not just a direct trade between the United States and Japan. From the young girl watching Unico and Ranma 1/2 in Bolivia, to the confused (and equally rabid) teenage boy watching "Duragonball Zeto" on Telemundo, to the fan communities in Australia, Italy and Great Britain, anime truly is a global medium. 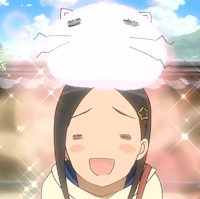 I’ll tell you something. Friendships end. Friends come and go. It’s a fact of life. However there is this one friend that I have met in my early childhood and haven’t left me ever since. That friend is anime and through that friend, I’ve done a few things and met many other friends.
As much as I am currently busy with college nowadays, because of my graduating thesis and an almost endless barrage of school projects and requirements, I always reserve time for anime no matter what. Not watching anime for a day is like depriving me of that one dear friend.
While the majority of other people would consider it simply as a hobby, or simple cartoons that are only for 5 to 12 year old kids, I consider it a friend. It is a friend that has been there with me during my lowest moments. It is a friend that greatly helped in shaping the person that I am now.
My first exposure to anime was during early childhood- my elementary years. During that time, my family moved a lot, so I really don’t have much people who were my age to talk to. My respite was watching anime on TV. The thing about it is, back then, I didn’t know they were anime. I thought they were ‘just cartoons.’  I would watch shows like Voltes V, Dragon Ball Z, Time Travel Tondekeman (which was called "Time Quest" in the Philippines), Yu Yu Hakusho (called "Ghostfighter" in Philippines) and Sailor Moon.
It was around early high school that I learned about anime from a friend who watched the same shows I did. It was also around that time that anime was slowly gaining ground in the Philippines. Gundam Wing, Magic Knight Rayearth, Recca no Honoo, and Tenchi Muyo started airing while Voltes V and Yu Yu Hakusho were becoming cult favorites among Filipino anime fans (like Saint Seiya was in Brazil). What really sealed the deal to lock me in anime fandom was Neon Genesis Evangelion, which was an iconic anime of the 90’s (and still is today).
It was during my late high school - early college years that anime started booming in the country, and I became active in the local anime community, and attending and participating in local anime conventions. I also did a few cosplays too.
I guess the idea for me to start a blog was during the time when I finally have gotten used to college, during my latter years there. I’d stopped attending anime conventions at that point due to increased school load. I wanted to express my anime fandom other than just watching anime. I was no longer content from just watching anime. It was at this point that I started lurking in anime blogs. At first I hesitated to start an anime blog because I’m a bad writer, but after convincing myself that an anime blog would be a good way of improving my writing skills, I started my anime blog.
The one thing I’ve never expected is that the aniblogging community would be so welcoming. I was able to improve my writing thanks to a few people in the aniblogging circle, and in time I was able to talk to other anime bloggers. I was able to have discussions with them regarding anime related stuff and other nerd related things. I would have never thought that I would look forward to regularly talking people in Twitter regarding anime.
Anime has been a major part of my life. I’ve seen and read about people who are so secretive of their anime fandoms to their friends (and sometimes to their families,) but I make no secret about my anime fandom. I’m very forward towards people about my love for anime. Some people would give me this weird look in their faces that tell me “this guy is too old for cartoons.” but I really don’t care. Why should I be ashamed of something that has been a huge part of me?
Thinking about it, if I hadn’t had anime as a friend, I wouldn’t have been able to experience a lot of things. I wouldn’t have done things like cosplaying, aniblogging and doing anisong karaoke with my fellow local anibloggers. I wouldn’t have met many kinds of people if it weren’t for my anime fandom. Most of all, I wouldn’t have learned things that I normally wouldn’t learn if it weren’t for my anime fandom.
I am very thankful that I am an anime fan, and that I have anime as a dear friend.
Posted by Anime Anthropologist @ 12:27 PM