from east to (mid) west: reflections on anime central 2014 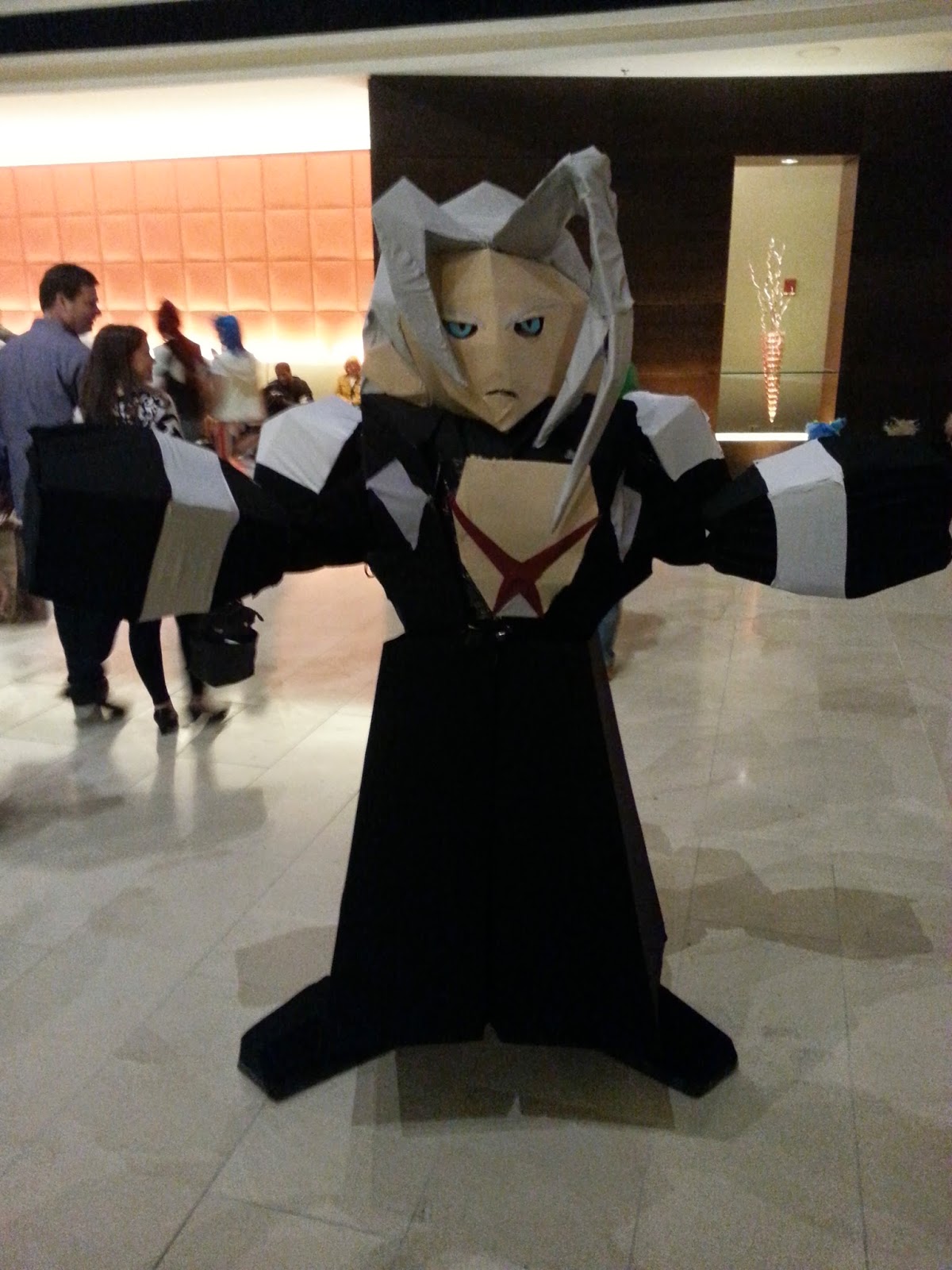 When I started traveling to cons in earnest back in 2009, one of the biggest questions I had was how do events in my region differ from elsewhere. While I eventually became intimately familiar with the East Coast con scene (and especially the ones in Virginia and New England), I had little contact with the communities outside of those areas. Even after attending events in Ohio, and Otakon Vegas this past January, I still had little experience observing con dynamics away from what I was familiar with.

I first started attending Anime Central in 2009, back when I was finishing up my MA thesis on online communications. I had been out of the American convention scene for awhile, and wanted to go; I ended up staffing, and doing two panels (on Japanese sacred lore, and how not to talk like a 13-year-old). Back then, Anime Central seemed a good place to relax, and get enthusiastic about guests or series. And, as someone who loves looking at art of various forms and figures, the Artists' Alley was the best I had seen. So when I was able to come to Anime Central once more for 2014, I really wanted to make it count. I would staff. I would do panels. I just wanted to be there. I also wanted to see my past staff and people I worked with again, as well as artists, as well as some of the guests, so this year really was my chance to go if I was to go again at all.

Much like my first trip to Otakon, I wasn’t very prepared for what was about to greet me. I had easily underestimated the size of the con by a few thousand attendees, and had signed on to work staff shifts in exchange for a hotel room. From the moment of my arrival on Thursday, it was clear how massive this event was, and how much attention and effort went into pulling it off.

Anime Central is not a small con. The numbers I was used to rivaled Otakon in size, with this year rumoring 30,000 or so. So if you think "oh, Anime Central is out in Chicago, it can't be as big"... it's big. And run very smoothly in general, for such numbers.

Anime Central has a very distinct vibe, one that I have felt before at Anime Boston, Katsucon, and Otakon, but unlike those other events, Acen’s is subdued. That thrum of energy and excitement was very present- you could easily feel it near the registration lines and within the spacious Exhibit Hall- but once removed from those areas, it took on a much lower key. Areas like the Hyatt Lobby and outside the Convention Center were overflowing with attendees, and likewise more of the same powerful community essence, but once one entered serpentine hallways that connected the various venues together, everything once more vanished beneath the surface of attendees heading this way and that, looking for their next destination.

At Anime Central 2014, I felt that while the larger community had a positive attitude towards the convention itself, the convention felt much as the East Coast conventions felt years ago. At Anime Central, people were waiting for 4 hours for the dance, or discussing how much swag they bought from the vendors.  And while every con has something like this, given my more recent experiences on the coast, it felt awkward.

Then again, I was also seeing different facets of the convention than most attendees. I staffed Anime Central since the start of my attendance there, so the Exhibit Space (vendors and artists) or registration areas were where I based all of my activity from. This year was no different: I was largely going from these areas, to my hotel, and back around.

The unconventional design of the Stephen’s Convention Center takes some getting used to: while the ground floor consists of the Exhibit Hall and lobby (a popular destination for indoor cosplay shoots, which was a necessity during rainy Friday), the upstairs areas practically do not exist. Unlike the Hynes or BCC, which are layered floors of rooms and large hallways, the Stephens consists of clusters of ballrooms and tiny interconnected walkways. Navigating them, especially for a first-time attendee, can be confusing (as I discovered Friday night en route to a panel). Because of the broken and enclosed nature of the space, there is an obstructed flow all around, which hampers the travel of both people and energy. It’s hard to put the feeling into the proper words, or even the right analogy, but once you feel it, you will recognize the difference.

Anime Central has great community; you can see this in the staff, too. This is the only convention in which needs from "I have blisters, where can I find bandages" to "I'm overloaded, I need a quiet space" are taken seriously. The convention center's own staff worked well with the con staff too, for the benefit of attendees; this was most easily seen at the registration/exhibit areas, when they were working together to help people around or checking for access privileges. Some of the staff even recognized me from past years and asked for a hug.

But other realms also felt awkward to me: the convention was spread out over the convention center, plus several rooms in the nearby Hyatt, and several of the passages were closed off. Walking around the maze of corridors could get frustrating. There was also little-to-no line management for panels, even though the panels were generally well attended. Coming from the great line management at registration and Exhibit Space, this felt very inefficient.

But how does Anime Central really differ from the conventions I am accustomed to? Cosplay is still a huge part of the event, as is the informal dance (with its lines snaking around the block). People still congregate outside the structures, and cheer at random things (especially in the registration line). People still have fun.

Stepping into Anime Central in 2014, I felt the same energy and community that Anime Boston had when I first attended in 2007. A little crazy, a little raw, and plenty of room for refinement. It was a large crowd of people with plenty of appreciation, and not much direction on what to do with it. This was the same opinion I heard time after time over the weekend, from industry folks to fellows I know well from the east coast scene. Unlike Anime Boston, which can be compared to a sort of “fandom sword” with regards to mission statement and how I cuts a sharp cross through diverging interests and convergent experiences, programming, and execution, Anime Central is closer to a “fandom hammer,” full of enthusiasm and force, but lacking a concrete direction for those fans as they grow, mature, and seek something different. (There are several discussions on the Acen forums echoing this at the moment.)

We ran into a young lady who ran mythology panels, and while talking to her, we ended up expressing some of what we saw. Mythology and other cross-cultural panels are common on the East Coast, but at Acen, only one panel on "Japanese religions" or "Philosophy in anime" is doing a disservice to both subject and attendees. We aren’t sure why there were so few; maybe not many were submitted, or perhaps feelings of discomfort with analysis, or the convention not seeing benefit in it, but the demand seemed to be high judging from the lines and interest. Judging from experiences like these, as well as experiences within our panels and in the forums, there is definitely an audience interested in learning more about narrative, art influences, history, and cross-cultural interactions: but it seems to be a slow start.

Simply comparing Acen to AB this year is highly indicative: while AB was full of theoretical content, educational lectures, and fans discussing and debating in the halls, Acen contained very little. When a panel like that did appear, it quickly filled up, but the attendees seemed almost unsure how to react. While they did appreciate learning new things (plenty of people were taking notes during both panels Kit and I presented), they were very reserved during the panels themselves, only making their interests known afterwards.

I remember the difficulties during my early presentations getting people excited about learning things at a con; many people went there as a break from "ordinary life," school, or work, not to sit in a classroom. As Charles said, there is a great deal of "throwback energy" - though, due to the audiences being very friendly and reserved in a very Midwestern/Great Lakes area sort of way, it also made the actual presentation a bit hard to judge. I confess I was a bit more subdued than usual, more because I was standing on my feet for hours upon hours by then - but a high-energy, in-your-face enthusiasm seemed to just wash over the audiences at Anime Central.

In other words, quite similar to the same panel experiences I had 5 years ago, back before the tide of “thinking man’s content” began filling up convention schedules on this coast, and fans more visibly excited to contribute. (The closest example I can offer is Zenkaikon 2011- the attendees reactions were identical to what I encountered at Acen.) Whether this is because the convention hasn’t been exposed to it before, location, or a lack of people to offer such content is unclear. All I can really attest to is a sense of nostalgia radiating off the con. Acen clearly has the size, and the love from its attendees, but that love is still seeking a stronger focus.

Guests also included Helen McCarthy (author of The Anime Encyclopedia, Osamu Tezuka: God of Manga, and uncrowned Queen of the world), whom I was glad to finally meet; Crispin Freeman, theologian and voice actor par excellence; and Josh Grelle, who joined Charles, Helen, and myself for a special presentation of Crispin’s Sentai lecture on Sunday evening, and talked shop about all sorts of material afterwards.

That said, Acen is definitely one of those conventions that people need to attend at least once. It shares a great deal in common with the giants of the East Coast, but also has an identity all its own, one that is definitely in a state of flux. It might be tempting to attribute a lot of this con to inertia, but that would be doing it a disservice. Anime Central has a very long history, and a very devoted base of attendees, which truly enjoy the experience and sustain it year after year. That is important to remember: a con survives by its community, and Acen has that community.

Maybe Anime Central just needs to find out where it is, and where it wants to go. That's not a bad thing at all. And with its communities and people and city supporting Anime Central, I'm looking forward to next year.
Posted by Anime Anthropologist @ 8:00 PM