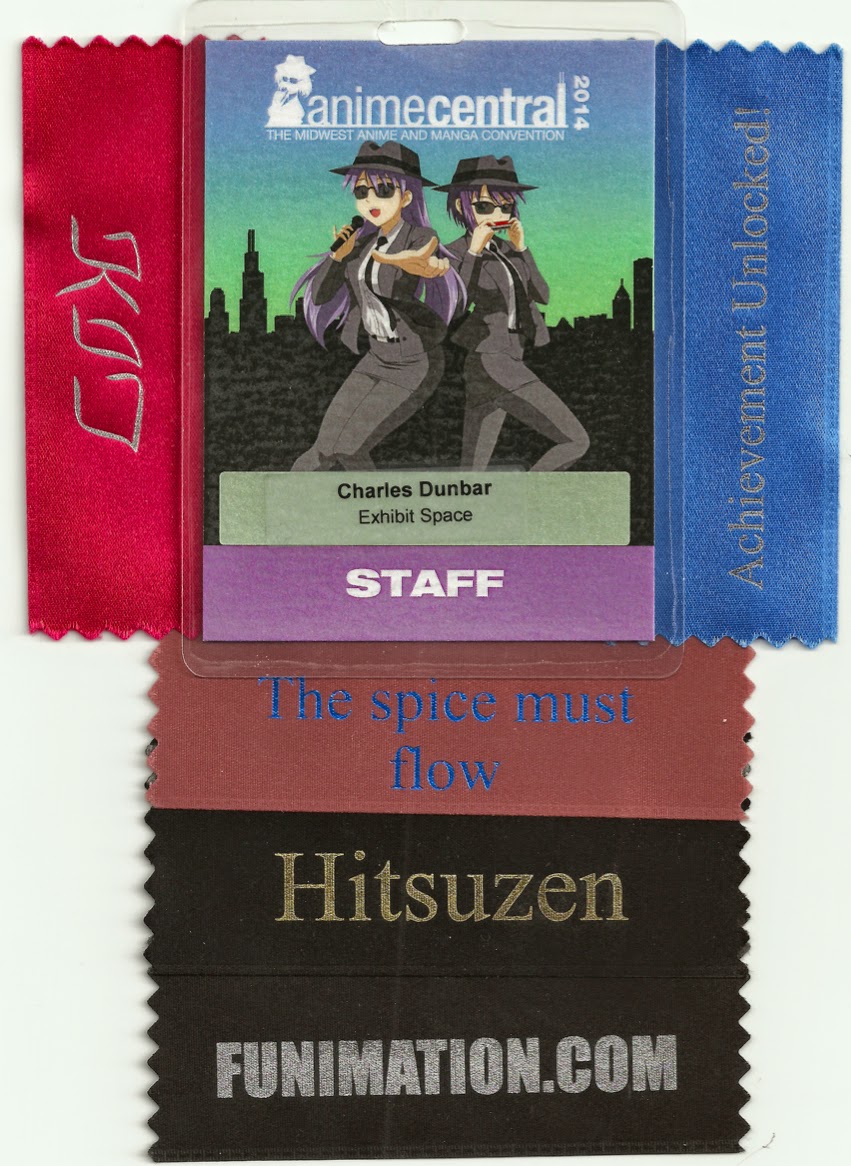 Staffers have it rough.

Depending upon who you are/know/meet, this statement can either be myth or reality, understated or over-idealized. Staffers provide the necessary manpower and physical energy to run conventions, showcasing a strong devotion and stronger will. They are the glue that holds events together, often working for little more than floor space, a badge, and some food. And while reading these words here might sound incredibly obvious to a reader staring at a computer screen, during the con, they might never cross a person’s mind.

Staffing a con is fairly close at times to being a thankless job. Some gather long lists of “horror stories” on par with those that all service folk manage to compile over the long years of “dealing with the public,” while others throw themselves into their work, almost to the point of collapse. But those same staffers also smile, knowing that their devotion and dedication allow for the events they work to play out, and bring joy to the attendees who crowd the halls, the same people who might not notice them, might have unfair opinions of them, or might never stop and consider joining those ranks themselves.

Those readers who have met me know I have had a longtime desire to actually staff a convention- it was the one role I never took on at a con, usually due to programming obligations. I dabbled a bit in it at Nekocon last November, but the two instances that stand out in my mind revolved around me covering a panel on Sunday morning- which is something I’m familiar with, and therefore “not a staff duty” to me- and locking up panel rooms late Friday night. An extensive list of panels and observations on Saturday fractured any sort of concrete shift schedule, and the rest of the time I was mostly running around the con floor, wondering what exactly I was supposed to be doing.

Anime Central offered me my first chance to jump right in. I had wanted to attend the event due to a confluence of factors, namely some guests I rarely see, friends who moved to the area, and a desire to see a con outside of my usual “route.” Opting to work 24 hours worth of staff shifts was not a problem for me, because I was still eager to sample that part of the convention experience, and because my co-voice on this site was also on staff, and in need of some solid “sanity retention services” (not unlike the same service I provided to Bernie Klein at Nekocon last year). So with a solid plan in place, I made the trip out to Chicago and into several entirely new worlds.

I could go the cliche route and say that working a con will make you respect you con staff even more, but in all honesty, I found the experience to be yet another layer to the same community that I have been a part of for years. Joining a dedicated crew of con staffers isn’t much different than finding a “crew” of friends who you attends cons with. Both are groups of dedicated fans who thrive on the communal nature of the event. Both have their expectations, successes, and failures. And both derive pleasure from their activities during the con weekend, which carry over back to the “real world.”

(The major difference between Acen and Neko boiled down to how well I knew the staff around me: Bernie and Tom were friends I had known from many cons prior as a panelist, who had brought me on board at my own request. Anime Central was akin to being thrown into a foreign land, with people I had never met before, and having to adapt. Therefore, my Thursday night "social" served to better acquaint me with the fellows I would be working with, and introduced me to some awesome people.)

Being staff does offer a unique view of the convention experience. Behind the scenes, there is a special type of frantic energy, as one rushes to complete a task before the doors open. Working in Exhibits has the added “stress” of managing to do all this work with lines of attendees awaiting the call for them to rush into the vendors and artists, eager to acquire more swag in as little time possible. Between knowing you’re under a deadline, and feeling the buzz as more and more attendees line up, it can either energize you, or feel like a wave of impending doom, and you without a surfboard. But at the same time, you also know you are not alone, and that there are others there willing to help keep you above water.

Acen ES came in two “flavors:” routine tasks, and heavy footwork. From the moment I arrived, there was work to be done. Thursday was spent in a flurry of bag stuffing and escorting artists and vendors to their tables. I spent a chunk of my Friday morning manning Exhibit Space check-in, where I set a new personal record for running back and forth, as I attempted to expedite the process of gathering badges and assisting with spontaneous issues...and more bag stuffing. Saturday was a series of broken shifts, where I attempted to balance even more bag-stuffing with midday panels, meetings with friends in the area, bag stuffing, and keeping Kit sane as she performed her duties as an assistant department head. Sunday consisted almost entirely of checking on artists, making sure the space ran smoothly, and double checking that the art show hadn’t burned to the ground mysteriously.

While it took a definite toll on my back and hips, it also felt more rewarding than I had anticipated. I had always viewed the “menial tasks” performed by staffers as routine and dreadfully dull, but that was never the case. Even while performing tasks as simple as stuffing programs into bags, I still felt like I was contributing to the success of the event, albeit in the simplest ways possible. (Plus, I always describe such tasks as being very “zen” to me, which helped clear my brain out when it became cluttered with random stimuli...and believe me, random stimuli are far more powerful when you are running around making sure everything is going according to plan.)

It also allowed me time to traverse the exhibitors, spending a good four hours making sure everything was running smoothly, speaking with artists, and (at least in my head) maintaining a sort of order in the room. I might have been exaggerating things at times (and who wouldn’t their first time doing anything), but it was still a new experience, and I was determined to do my part, even when I wasn’t exactly sure what my part was.

It goes without saying that among staff, there are their own unique games and interactions that attendees just don’t see. While the majority of staff might appear to be all business over the weekend, in reality they are just like anyone else in the scene. They have their ups and downs, their devotion to fannish pursuits (like collecting funny ribbons to attach to their badges), and a strong sense of family akin to the bonds attendees make with each other. I know I met some truly wonderful people over the weekend (Brian and Leon, this means you, if you read this), who made my time at the con special with their own brand of humor and stories about their time in the scene. Like I said earlier, not too different than attending a con with your friends...because you eventually realize that these staffers are also your friends.

(And in a humorous parallel, I actually spent most of the weekend wearing someone else’s staff badge, which led to a series of funny encounters with one of my department heads repeatedly “forgetting” my name, and me referring to unintentional cosplay. But I will say this, when I finally received my own badge on Sunday, it felt like a really big deal to me. Like I had “made it” somehow, and it renewed my energy just enough to last those final 6 hours on the show floor.)

II’m not going to say that everyone should try to work a staff shift at a con, because this is not something everyone would enjoy. Being staff is definitely not easy- it requires a lot of energy, both physical and emotional- and there will definitely be times where it feels like you are drowning. It’s a different kind of emotion than just paying for a badge and walking around the halls. It also requires a good deal of self-sacrifice, knowing you will only get to see part of the convention. But it also illuminates a good deal of the labor that goes into putting on a show, something that one needs to experience in order to properly appreciate. And that’s why someone wondering about volunteering should: if you already have the appreciation and want to give back, then go for it. Volunteer your time. See what you bring back from the experience. It will definitely open your eyes.

Posted by Anime Anthropologist @ 11:55 AM