Detour is one of the six tales included in my Ghostly Tales chapbook, which is available NOW in both physical and digital editions from Study of Anime (just click one of the buttons directly to the right of this post).

All the stories in Ghostly Tales were inspired by Japanese folklore, but were written by me.

Every day, Tomoko would take a shortcut home from school. Cutting across the back of the small school building, there was a trail cut into the trees and reeds that connected opposite ends of the long, roundabout road that the rest of the students took back to the town she lived in. She never knew why the road was so wide, and curved so long, only that everyone in town took it, despite the ease at fashioning a new road through the relatively flat trees and plain that separated the school from the rest of town life. Whenever she asked her parents, they would tell her to take the bus down the winding road, and not to venture off into the trees.

Tomoko listened to her parents for years upon years, but as she grew older, with longer assignments and more friends to spend her time with, she began to ignore their words. After all, there was nothing off about the trail- it led straight from school to her own street, was clear enough that her uniform wouldn’t snag on loose branches, and (at least in her head) was a small dose of excitement to her otherwise ordinary day, as she would occasionally come across strange animal tracks, or hear calls on the wind she didn’t recognize.

Tomoko had been using the trail for almost a year, when she discovered something she had never seen before. One day, while skipping through a light breeze, she nearly tripped over a tiny statue half-covered in loose dirt. It looked very old, rounded and weathered, its features obscured completely by caked dirt and time. She had passed by that spot every day, had explored it even, on those first few weeks, but had never seen something as strange as the statue. She hesitated for a moment, then lifted it gingerly in her hands.

A sudden rustling in the reeds distracted her, and she nearly dropped the statue. Peering off towards the source of the noise, she was further startled as a strong wind blew into her face. She dropped the statue to shield her eyes, struggling to find breath as the powerful gust splashed over her. And then it was done, leaving Tomoko chilled, her uniform and hair a mess. She looked around for the tiny statue, but it was gone, which only made the chill Tomoko felt worse. She gathered her things and returned to her home.

Tomoko’s mother was waiting for her, with a smile and a cup of tea. “Moshi Tomo-chan. Okaeri-nasai. Welcome home!”

“...ano...” Still thinking about the wind and the disappeared statue, Tomoko thanked her mother and withdrew to her room. Outside, wind rattled the shutters and sent shivers down the girl’s spine. She sipped her tea, grateful for its warmth, and set to doing her homework.

Many hours passed, and she heard nothing more from her mother. She heard the sound of her father’s car pull up, and his booming voice as he entered the house. She heard her brother, likewise, return from his club activities. But Tomoko sat in her room, staring at her textbooks, and writing on a long sheet of paper. This continued until Tomoko glanced out her window, and saw it was dark. Late at night, with the moon shining over her neighbor’s house.

‘Odd,’ she thought, ‘Okaa-san should have called me for dinner long ago.’ She closed the book and headed downstairs, looking for her family. She could smell food coming from the kitchen, but it was quiet in the rest of the house.

“Mother!” she called out. “Mother, is it time for dinner?”

“Of course, my little girl, dinner will be ready soon.” Her mother’s voice called from the kitchen. Tomoko let out her stuck breath.

“Where are father and Taro? I haven’t heard from them since they came home.”

“They are with me, Tomoko dear. We are all here waiting for you.” 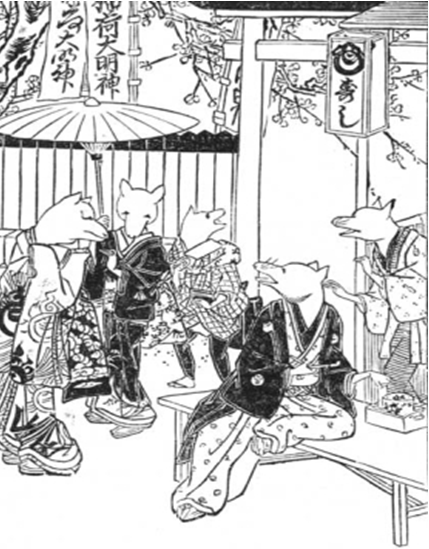 Tomoko rounded the corner into the kitchen, and gasped. Three foxes stood on the kitchen table, picking at bloody meat arranged on dinnerware. They looked at her with wide eyes, licking their chops. Tomoko began to tremble, feeling the room sway and shake around her. She had to grab the door frame to keep her balance. One of the foxes sat back on its haunches, almost smiling at her.

Then she heard the door to her house open. Casting a frightened glance down the hallway, Tomoko saw herself walk into the house.

***
This phenomenon was labeled “kitsune kaze,” the fox wind, and was recorded by Mizuki Shigeru in one of his many yokai indices. Specific to Saga prefecture, the wind has the power to spread illness, and in some cases possess female victims. His tale emphasized the importance and care that must be taken when hunting foxes and handling their remains, lest instances of fox possession cause damage to local communities.

Foxes have a long history in Japan of shapeshifting, wielding supernatural powers, and playing tricks on human populations. The belief in the fox’s power was so ingrained, in fact, that misbehaving female children were often attributed to possession, and sent for exorcisms that continued in rural Japan well into the 20th century! Additionally, foxes could assume human shape in order to infiltrate villages, and could only be identified by their use of the word “moshi,” instead of the traditional “moshi moshi” when greeting people. (Which, incidentally, is a solid method for dealing with ANY shape-shifted creature, not jus the fox.)

However, instances of foxes devouring human families? That was pure fiction, written for this story...it’s the tanuki that eat human flesh.
Posted by Anime Anthropologist @ 12:42 AM