12 Days of Anime: Kids on the Slope

One of the “unintended consequences” of congoing for me tends to be adding to my already gigantic backlog of series I "need" to watch. This backlog, which started in 2002 at AXNY when I spent $80 I didn’t have on Central Park Media’s new release of Record of Lodoss War: Chronicles of the Heroic Knight, is often measured in physical size, abstract proclamations, and rundowns of how much space on my three external hard drives is full of episodes I know full well I will never watch.

Yep, that’s how I roll: I see a series at a con, or hear about it from friends, take the time to acquire the show, and then it vanishes into the netherworld of data and broken promises. Like some kind of evil fandom publisher, I get all excited about prospects, but only one out of maybe a dozen manages to work its way into my schedule- the exact same odds as if I just happen to be in the room when something is being watched, and following it to the end. I am a master procrastinator, and sometimes get distracted by shiny things like Netflix or Persona games, which then dominate my time for months on end with promises of Tiny Fey or dungeon mapping, and those shows that once were the MOST IMPORTANT THINGS ON MY RADAR eventually become forgotten.

Along the way I’ve missed out on some great series, but every now and then I manage to rectify an oversight, which is exactly how I came to finally sit down and appreciate Kids on the Slope. Nevermind the fact that its another Watanabe/Kanno project, nor that it’s freely available pretty much anywhere, nor that I had heard so many great things about it. Until the day after Sangawa Project last week, I had never bothered to sit and actually experience the wonderful journey that is Kids on the Slope, despite it filling pretty much all my “required categories” for viewing. 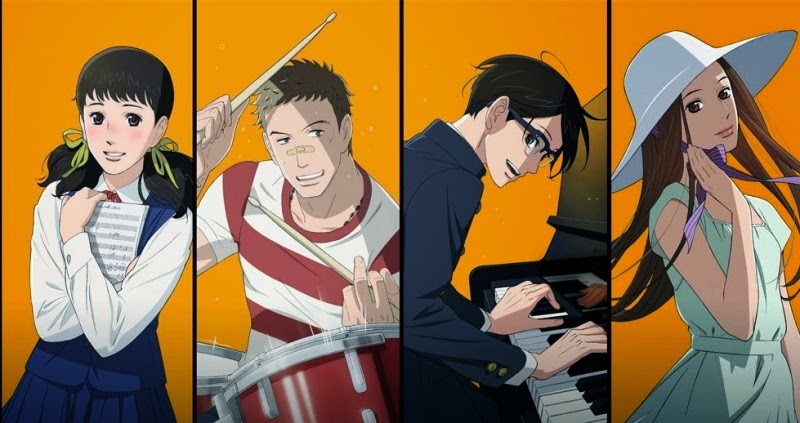 For anyone who hasn’t seen the show, do not go in expecting anything like Cowboy Bebop, which is usually the standard bearer for Watanabe/Kanno collaborations. Do not go in expecting tongue-in-cheek humor or anything speculative. This is a show about the bonds we make with our friends and those around us. It’s a slice of life that reflects a literal slice of life- postwar Japan, stuck in a forward march that would bring the nation into the modern world. It borrows ideas about god and religion, how music affects the composer, performer, and listener, and how temporal things can be. Over 12 episodes, four years of school life are experienced, the highs and lows, and how happiness can’t always be defined traditionally, or even expectedly. Kids on the Slope manages to carry the weight of a series two to three times its length, but never feels compressed or hasty. Much like a literati might not want to see Dickens’ Pickwick Papers end, it does, but leaves the viewer satisfied.

Oh, and the series manages to tie all this together through the use of jazz. Given Kanno's involvement, this is not a surprise. But the jazz is something entirely different than the flavorings from Cowboy Bebop- in this case it is a central character in its own right, a locus of activity rather than a scene enhancer. The music, the emotion, the energy, and the interactions that color the character's lives all revolve around the power of jazz music, and how certain Japanese embraced it. It's also one of those moments of culture trade, whereby Japanese identity has been challenged, but also united, around an expression of creativity that brought people together, rather than forced them to conform. Subtext within the series says as much, with revolutionary practices generating the same emotion that powers character to discovery themselves as the nation does much the same. 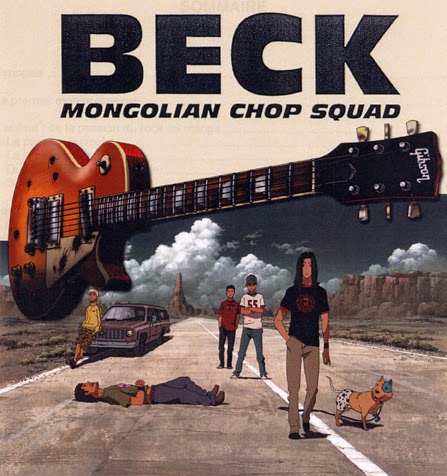 A lot of my thoughts about Kids on the Slope are reflective of my thoughts about BECK. For those who don’t know, BECK is my favorite series, because it also encompasses many of the same time-and-place instances where emotion crosses the boundary between the real and the animated. What I love about BECK is how real it feels, how organic the story progresses, and how the characters (particularly Koyuki, Ryusuke, and Chiba) drive the story more than what they do, the actions they take. But what really pulled me into BECK was its use of 90s alt-rock culture, and how music can cross national boundaries and bring people together. The idea that BECK wants to create music for the sake of creating music, and how they want people to experience truly powerful emotions while listening to the products of that creative impulse, draws me back into those same years, when I was a young(er) man, caught up in a mess of emotions myself, and how music was the one force that helped me make sense of them. Those times led me to a stint in the music industry, where I met plenty of bands just like BECK, who would teach me the value of creativity and dedication, and would inspire me in their own ways to leave something for future generations, no matter how challenging it might be.

Watching Kids on the Slope, I couldn’t keep myself from wondering how I might have reacted had I been from that time period. But it also reminded me that music isn’t temporal itself, especially jazz, with its rich history and powerful legacy. While the show only touched on the impact jazz made in Japan after that war, the fact that the show used the music to illustrate character growth, but kept the camera fixed on the players instead of the movement, kept me hooked. What started out as an episode or two became three, then four, then a trip to the game store, followed by a marathon that only ended when the cat let me finally stand up and reflect on what I had just seen.

I rarely marathon anime anymore, especially subbed shows, but when it came to Kids on the Slope, I had to see how it ended. There was no putting it off. The music was always there, in my ears, and it demanded that I finish what I began. So, with no distractions, I did. I consumed the entire show. It was only a single day for me, but that was enough. This was a year full of those “just enough moments,” which future articles will point out, but this most recent instance still stands fresh in my mind. However uncommon it might be for a series to grab me and force the experience, Kids on the Slope did. And it reminded me once more of why I appreciate the medium so much,

On the first day of anime...I remembered how stories can be told, and why its important to listen.
Posted by Anime Anthropologist @ 4:42 PM