Today's story is a bit different than the one I shared with you on Monday. Rather than give you another urban legend or tale of frivolity and irresponsibility, I thought today I would like to share with you a tale about what the con means to one particular, special girl. You see, not every convention story contains crazy experiences, culture shock or wacky cosplay. Sometimes people like to tell tales that revolve around love, friendship and acceptance. This is one of those stories.

First and foremost, I do not know who this girl is. Animology did not exist back when I gathered this story, and I am fairly certain we did not trade contact info. I met her only twice in my life, once at Anime Mid-Atlantic and once again at Nekocon this year. She was an outgoing girl, very friendly, and she filled out one of my surveys after the writing and character development panel at AMA. Then, over the course of our conversation, she told me this story:

I live in a very bible belt like area, out in the middle of the country, where things are very conservative. I'm a lesbian, I was raised by hippies and come from a very mixed religion family (everything from baptist to hindu to atheist). Cons are places I can go to and not be a freak- I kiss my girlfriend and people applaud me instead of quote scripture at me. It's amazing, I can be the freak I am.

This is a sentiment that frequently comes up when I ask people about why they attend cons, or what they get from them. Acceptance by other people, shared interests, the ability to "freak out" ad not be judged by it, these are all major factors that contribute to convention attendance. Oftentimes fans have to keep their interests hidden or subdued because the places they live and the people they are surrounded by will not approve of it. I met another girl in Pittsburgh last year who attends each Tekkoshocon because it is the only place where she is not called a "devil worshipper" because she likes anime. The ability to "cut loose and be yourself" is a hallmark of anime conventions, and it gives the attendees something to look forward to and relish in, at least for the weekend.

Despite the occasional bouts of "justification" and "elitism," otaku tend to mingle well. I've been told that, unlike any other subculture, anime (and by extension, anime cons) accepts everybody, even fans of other mediums and fandoms. Gamers, Trekkers, Jedi, TARDIS passengers, geeks, dicechuckers, professional fans, comic fans and even furries can all find a place at the con. And while there will always be those who seek to "knock down" those they meet, the same is true for any type of fandom, period. The fact remains that if you are a fan of something, you will find others like you at a con.

Case in point. At this year's Otakon there were two Doctor Who photoshoots. The larger of the two, which was on Saturday, contained over 20 participants ranging from the various Doctors 4-10, Jack Harkness, female companions and other associated fans. The photoshoot itself lasted for more than two hours, as every few minutes a new crowd of fans would assemble to take pictures. There was even a blowup TARDIS, which attracted even more exposure as it, and it's three accompanying Doctors wheeled it around the con. I was a part of that photoshoot, and have been cosplaying the 9th Doctor since Anime Boston, and hardly a con has gone by where I am not stopped for pictures or bump into another Doctor making an appearance. Doctor Who is most certainly not anime related, but he has a huge following at cons. Same holds true for Star Trek, Star Wars and many other large fandoms.

But I might be getting a tad off-track here. The point I wanted to make today was that anime cons are an open, accepting and friendly place to be ones self, free from the judgements and predispositions of the "real world." Can it be shocking, then, when attendees profess how much they love attending cons and how they want to attend more? If the con is the one place you can truly be yourself, why would you not want to be there more often? 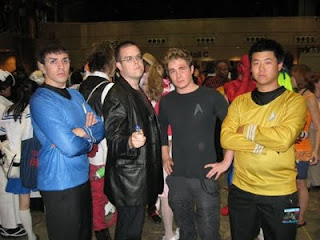 Spock, the Doctor, Kirk and Sulu 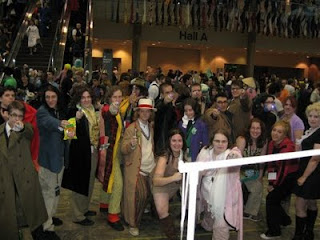