as lovely as new fallen snow

Today’s yokai profile is in honor of the Winter Solstice, and was written by JP Kit, a fellow yokai enthusiast and culture lecturer. Look for her panels at Anime Central, and on twitter @jpkit 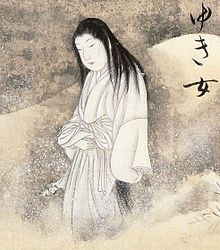 You bundle up against the elements, hoping that the wood of the shack you are in will hold against the snowstorm, and you shiver as cold wind blasts through the cracks.

This is no soft, visions-of-a-white-Christmas snow.

This is cold fury.

The door slams open and in the wind and the snow and the cold there is a woman in a white kimono. She is pale - in her kimono she almost blends in with the snow - and she enters the shack, looks you over.

This is a Yuki-onna, a woman of the snow, and you just may freeze to death.

The Yuki-onna story was reputed to be first written down by Lafcadio Hearn in his Kwaidan but there may have been precedent in a 17th century manuscript (according to the Obakemono Project entry). There are many Yuki-onna stories, sometimes with the strange woman being depicted similarly to a traditional Japanese ghost, sometimes with the woman depicted as a princess of the snow, sometimes as an entity closer to a malevolent monster.

The story as Hearn tells it involves two woodcutters - one young and one old. They were returning from their work and got caught in a snowstorm; retreating to a mountain shack, they tried to wait out the storm, when suddenly the door of the shack blew open and a woman stood there. She made her way over to the old woodcutter, breathed upon him, and the woodcutter froze to death. She looked at the young woodcutter intently, but decided against killing him, because he was young and handsome - but made the young woodcutter promise to never speak of her, or the incident, again.

The woodcutter eventually meets a young woman called Oyuki (yuki = 'snow') and falls in love. They marry and have children, when one night, the woodcutter is reminded of that winter storm so long ago, and speaks about it to his wife.

"You fool!" Oyuki says, when the story has ended. "The woman you met that night was me!" And if it hadn't been for their children sleeping in the next room, she would have killed him too, but in any case, she vanished, never to be seen again.

Since the Yuki-onna stories depict the strange woman of the snow being similar to her snowy surroundings, and because in some stories she can kill with a breath, she may be regarded as a personification of a great fear: the fear of freezing to death, and the attendant fears of being away from human company and subject to a natural fury. Like many other Japanese woman spirits and goddesses, the Yuki-onna can be violent but also faithful. She is wild, a force of nature rather than civilization, to which civilization must bow.

In addition to her origins in folklore, the Yuki-onna is also a popular cinematic device. Owing to her often highly sexualized nature, she has been depicted in film, television and manga quite frequently. In addition to the filmed adaptation of Hearn’s story within Masaki Kobayashi’s 1965 “Kwaidan,” further versions of the yokai have been featured in Takashi Miike’s “Great Yokai War,” the 18th Super Sentai series “Ninja Sentai Kakuranger,” a single volume manga tribute by CLAMP entitled "Shirahime Syo," the manga/anime “Nurarihyon no mago,” and the anime “InuYasha,” “Yuyu Hakusho,” “Urusei Yatsura,” and “Rosario + vampire.” 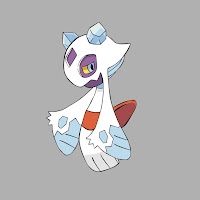 The idea behind the ice woman has also been adapted into the Pokemon video game series- not once, but twice. Though based on another old legend of a snow-creature (the Yama-uba), the Pokemon Jynx’s affinity for ice and its often solitary nature (and location around snowy mountains) might have been influenced at least in part by the yuki-onna legend. But the Pokemon that best reflects adaptation from this legend is the Froslass, a pure Ice type also found in mountains, where it drifts about in a flowing dress, wearing a coy expression.

Finally, the yuki-onna has (at least) twice been adapted by US game developers. The first appeared in the Japanese-themed “Kamigawa” block of the long-running collectible card game “Magic: The Gathering.” In the novel adaptation of the series, the main character summons a Yuki-onna to defend him as he climbs a mountain. The second is a tad older: in the second Dungeon Master’s enemy accessory for the “Ravenloft” campaign setting, a unique monster called Jezra Wagner, the Ice Queen, is said to prowl the mountains of the province of Barovia. Her tale is a tragic one, a girl trapped by an avalanche slowly starves and freezes to death in a remote mountain cave buried under feet of ice. Her spirit, restless and lonely, escapes the cave and travels the mountains and towns, draining males of their body warmth she craves, but cannot have. Like the yuki-onna, Jezra is said to be lovely and often sexualized, and not always necessarily evil. And, like the yuki-onna, she is a realization of the fear of freezing to death.
Posted by Anime Anthropologist @ 4:37 PM