some yokai fun: a quick interview with nina matsumoto


Last month at Anime Boston, I presented a panel titled "Mononoke Masters," a look at artistic and literary contributions to the furthering of yokai and yokai lore. One of the profiles during the panel was centered on Nina Matsumoto, a young magaka from north of the border, who's series Yokaiden was an interesting look into the folklore of Japan, told in a style that made it identifiable to Western audiences. While the series ended after two volumes, it is still easily available, and is worth the time to read.

Ms Matsumoto got her start as many artists do, drawing to their interests. After working on her own webcomic "Saturnalia" and creating commissioned artwork for a wide variety of clients (including the Insane Clown Posse, of all people), she posted and image to her Deviantart profile, entitled "Simpsonzu," which promptly went viral online. After catching the eye of one Matt Groening, she was approached by Bongo Comics to draw Bart Simpson stories for the official Simpsons comic series.

She was later approached by Del Rey to create her own manga series, and in November 2008, Yokaiden was released. Drawing on a wide variety of manga traditions, the story is much like other classic works of yokai lore, dealing with the intersection of the hidden and visible worlds, interaction between residents of both, and how humans and monsters can manage to relate to each other.

While preparing for that panel, I had a chance to interview Ms Matsumoto regarding her views on yokai and its appearance in the US.

How did you come about discovering yokai and folklore?

I'm Japanese and grew up with Japanese media so it's hard to say. I've been aware of it for a long time. I did have a Gegege no Kitaro manga as a child, so that was probably the biggest thing. But any time there's a Japanese fairy tale involving a bunch of monsters, like The Cut-Tongue Sparrow, they're drawn as specific yokai in children's picture books so that might be my first exposure to them.


When did you decide to utilize them for Yokaiden?

Many of my friends are into anime and Japanese video games, where yokai often make an appearance without any explanation as to what they are (especially in video games). I would often have to explain exactly what a kappa or karakasa is. I then decided to do a story that introduces some of the more common yokai to people outside of Japan. This was in 2007 when Del Rey approached me and asked for a story pitch.

What were your goals involving Yokaiden? Were you looking to use it as a way of connecting with your roots, a way of introducing others to yokai lore, a way of playing with folklore in your own "way?"

I guess I ended up answering this in the previous question! But to add to that, I've always liked "twisted fairy tales" so that was another major reason I wanted to do Yokaiden; although, I couldn't go too crazy with my own interpretations since it's meant to be an introduction. When I designed the yokai I tried to put some of my own twists to them while sticking to their traditional looks -- there was a fine line. For Kuzu, I made him walk on his hands instead of hopping his foot like a typical karakasa. There was going to be a whole chapter explaining how he's been ostracized from all the "normal" hopping karakasa.

Japan has come up with all kinds of interpretations over the many decades. Since they still aren't very well-known in North America, it's probably going to be a while before we see any of that here. I'd like to see yokai (along with monsters from other cultures) show up here more, and I hope I'm helping with that at least a little bit. "Nura: Rise of the Yokai Clan," and "Yokai Attack!" has been released here since Yokaiden's release, which has helped even more, I'm sure. And with Kitaro finally being released in English in North America, I think things are looking good on that front. 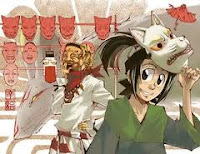 How do you think Western audiences view the idea of yokai? Has the response been generally positive, inquisitive or something else?

Western audiences are fascinated by yokai because they're so strange and wonderful and there's so many of them. From the reception I've received, I can safely say people here want to know more about them.

If you could be any yokai, which one would it be? (I can straight up tell you, I'd be a tengu.)

I agree that tengu are pretty sweet. Specifically I'd want to be a crow tengu, because crows are awesome.

You can check out more of Ms Matsumoto's work on her deviantart page and personal website, and follow her on Twitter @spacecoyotl.
Posted by Anime Anthropologist @ 1:45 PM