To be totally honest, I had never heard of this term before last year. I was texting back and forth with geek-specific fandom comedian Uncle Yo when he dropped "fan-lebrity" into the conversation. It was one of those "floodgate moments," to be sure. From that point onward, I've found myself dissecting a lot of the non-industry convention guests according to the "proscribed rules" of a new generation of fans, centered a lot around that term.

As you can possibly suspect, I also applied it to me. Narcissistic much?


But there is a truth behind the idea of fans "leveling up" to something else within the community. I wrote about this in my dissertation with regards to conventions (and in particular, panelists and artists):

"Rather than simply belonging to the masses, [they] have taken the step to stand out and craft something that is either educational or entertaining, and as such have marked themselves as willing to take more participation within the fandom. That they are fans themselves is not lost on the attendee either. Rather than being “faceless” or belonging to some professional caste (though they sometimes are), the vast majority of [panelists] started as fans, remain fans and seek to provide a richer convention experience for those same fans. Rather than see themselves as something apart from the rest of their fandom." 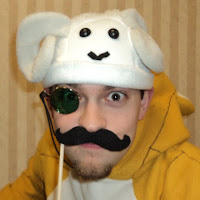 Without going too much into detail, the general idea I was trying to present is that for some fans, they need to do more within the fandom community than just participate- they need to contribute.

The Pros of Cons

I am a comedian who performs almost exclusively at Japanese pop culture events and anime conventions. To this day, I am still trying to define exactly what that means. I saw a niche and decided to speak to it directly. I was a fan. I made friends with fellow fans. I then garnered fans of my own. Then things got weird.

Our media-gorging culture is a macrocosm of microcosms, a universe of special interests and niches exploring themselves. One of the understated joys of being involved in any fandom is spreading something original, yet familiar, with the baptismal phrase “have you seen this?” Combine the viral nature of word-of-mouth-driven marketing and fan art and you have the Fan-Lebrity, the (wo)man with hundreds of thousands of views and hundreds of subscribers on Youtube that nobody knows.

The Internet gives you opportunity to be noticed, assuming you have a talent or product. But how do you acquire and, even rarer, hold the attention of your like-minded audience? The experiment has plagued me for years, and I’m sure there are millions of dollars invested in online pop-up ads seeking the same answer. Fifteen minutes of fame have dwindled to the fifteen second attention span of the average Internet junkie. For my money, every writer/performer who ever garnished and maintained a level of celebrity among their fellow fans has, in some way, balanced the four major “C’s” of Internet fame:

Context. “Look what I made based on [blank].”

The Fan-lebrity rises to recognition because of her talent, intellect, or originality through reference to existing material. But their flash-in-the-pan fame spreads much quicker when striking hot oil. Some are able to release a web-comic or viral video during a high-point in an anime’s popularity to bring attention to themselves. Two examples of talented musicians who piggy-backed their skills through a pop culture icon are Megaran and The Protomen. Megaran is an improvisational rapper who sings new lyrics to existing Megaman songs via permission from Capcom. Similarly the Protomen released two rock opera concept albums about beloved video game characters Megaman, Protoman and Dr. Light. Would these skilled musicians have been recognized as early if they hadn’t relied on Capcom’s Blue Bomber, thus catering to an entire generation’s nostalgia toward the cherished franchise? Possibly. But not nearly as quickly.

Community/Communication. “What did you think about it? What should I do next?”

Few convention celebrities make it past their second con without the kind words from a fan. The 2000’s give fans something they have always wanted but never had: a direct line of contact to their favorite creators. Through forums attached to your website, Youtube posts or live U-Streams, your fans can find you any time they want, and your loudest fans are your best publicity agents. To keep them happy, though, you must respect them. This may create a Catch-22 depending on the size of your niche. If you branch away from content familiar to your audience and sever that common connection, you will retain your loyal fans that like you for you, but lose the immediate, topic-hungry fans. If your fans are able to support you directly, that charity imbues them with a sense of spiritual ownership, personal investment and the safety of belonging. They will wear their fandom as a badge of honor because it forms an identity that they can choose for themselves.

There is a very liberating feeling to wearing my Green Lantern and Fire Ferrets T-shirts at conventions; I don’t have to explain what or why I am wearing in a community within the know. When on stage, I face people who have watched what I have watched and loved what I have loved without ever shaking their hands or learning their names, but if I can make them laugh based on something that only they and I can reference, a permanent bridge is built between us.
Constant Care. “By the time you’re done with my backlog, I’ll have the new one up.”

You must update. If you want to make a living from your art, you will turn “art” into a verb and not compromise. If you release on a reliable schedule, your established fans will continue to pull in others. One question I continually ask is “why:” why do you enjoy this show over this? Why do you identify with this character? People light up when you ask them what they like and why; and while they may not always articulate precisely, the comfort you create can be life-changing. You can attract so many more bees with enthusiastic and sincere curiosity than you can through cynicism, critique and sarcasm.
Creative Freedom. “We can be real here; it’s safe.”

Television and film celebrities appease endorsements, producers, corporations and the FCC. The Internet celebrity does not. You want to swear and be graphic? Go ahead; the Internet is the land of artistic freedom. The problem now is that you don’t have a salary or a steady stream of income without a steadier stream of released content. Fan-lebrities rely on their fans to buy merchandise and click on uploaded videos week after week. The dedicated fans become your bosses.

Ultimately (C’s set aside) the title and effect of “celebrity” is subjective to the eye of the beholder - the one that doesn’t shoot fire bolts. Within the ecosystem of a weekend-long convention, only the majority can tell you when you’re famous. Fame cannot be forced upon a stranger any more than personal beliefs:

Celebrities are artists within a closed circuit of like-minded people. Artists begin learning their craft by studying, dissecting and dwelling on an existing source material. Never forget, every fan-lebrity at a convention was a fan first.