ride like the wind - a side trip to kansai

The "Ride Like the Wind" episode of Kill la Kill (episode 14, for you observant people you), seems to play off of school trip cliches in anime.

Only in this episode, in this series, Honnouji Academy uses this to try and battle other schools and incorporate them into Satsuki's plan. There are many references and stereotypes being played with here, and even though I can catch this much, there are probably more references being made that I didn't catch.


For reference, Tokyo is in the Kanto region of Japan: you can see the Kanto region highlighted here. The schools still resisting are in the Kansai region of Japan – predominated by the cities of Osaka, Kyoto, and Kobe. This area is sometimes called the heart and soul of Japan: it is also known for different tastes in clothing, hobbies, and food. But these cities are different from each other, too, as much as “Kansai region” can be called a coherent region at all. 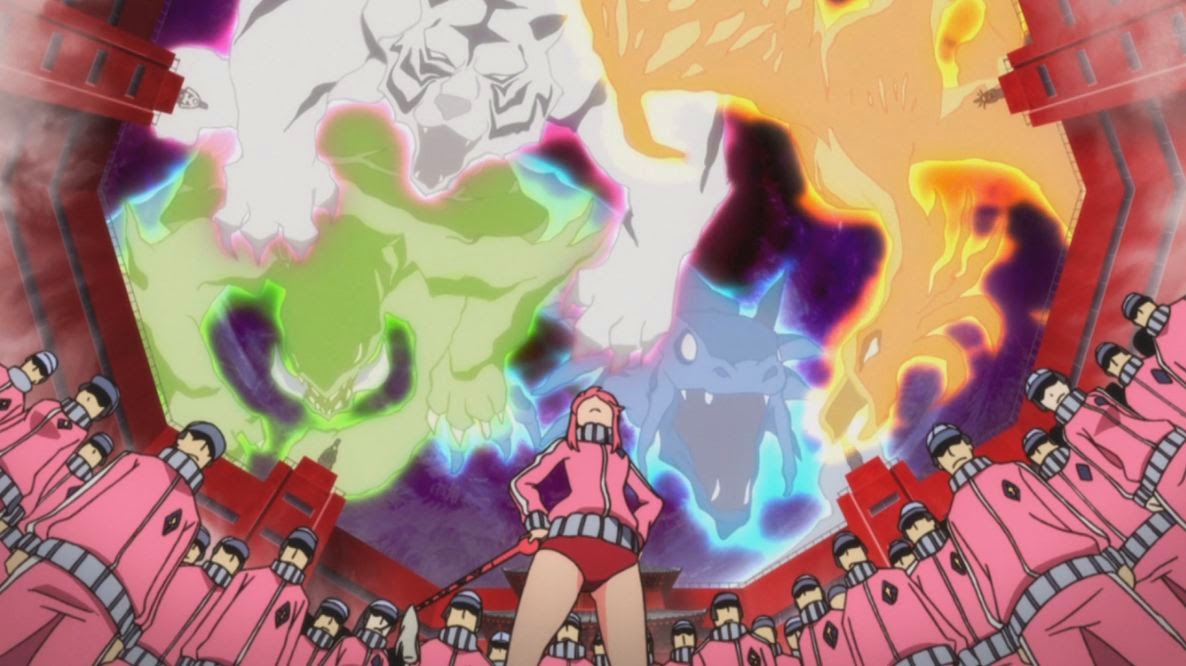 Kyoto's battle takes place in what seems to be a court temple or pavilion. This is intentional, as Kyoto is the legendary city of “temples and shrines” - and was the imperial and administrative capital of Japan for about eleven centuries. As such, the opposing team from Abekamo Academy draws upon various traditions, similar to the onmyouji/court diviners of the Heian period – the academy's name in fact references the most famous onmyouji, Abe no Seimei. This Abekamo group praises their own tradition, and uses the Chinese-influenced guardian symbols: Suzaku the vermilion bird, Byakko the white tiger, Genbu the black tortoise, Seiryu the azure dragon. They sound just as haughty as court nobles, and retain the particular soft-sounding dialect of Kyoto area, even when trying to threaten Nonon and her team. Inumuta steps in using modern techniques of holograms and scientific-sounding phrases, in contrast with Abekamo's using centuries-old symbols; in fact, he even calls on postmodernist and non-Euclidean geometries.

Nonon's comment sums it up: maybe it takes nonsense, or mysterious technobabble, to deal with nonsense and technical mysterybabble.

Nonon ends up defeating them with a fitting counterattack though: that of the modern ceremonial tune “Pomp and Circumstance”. 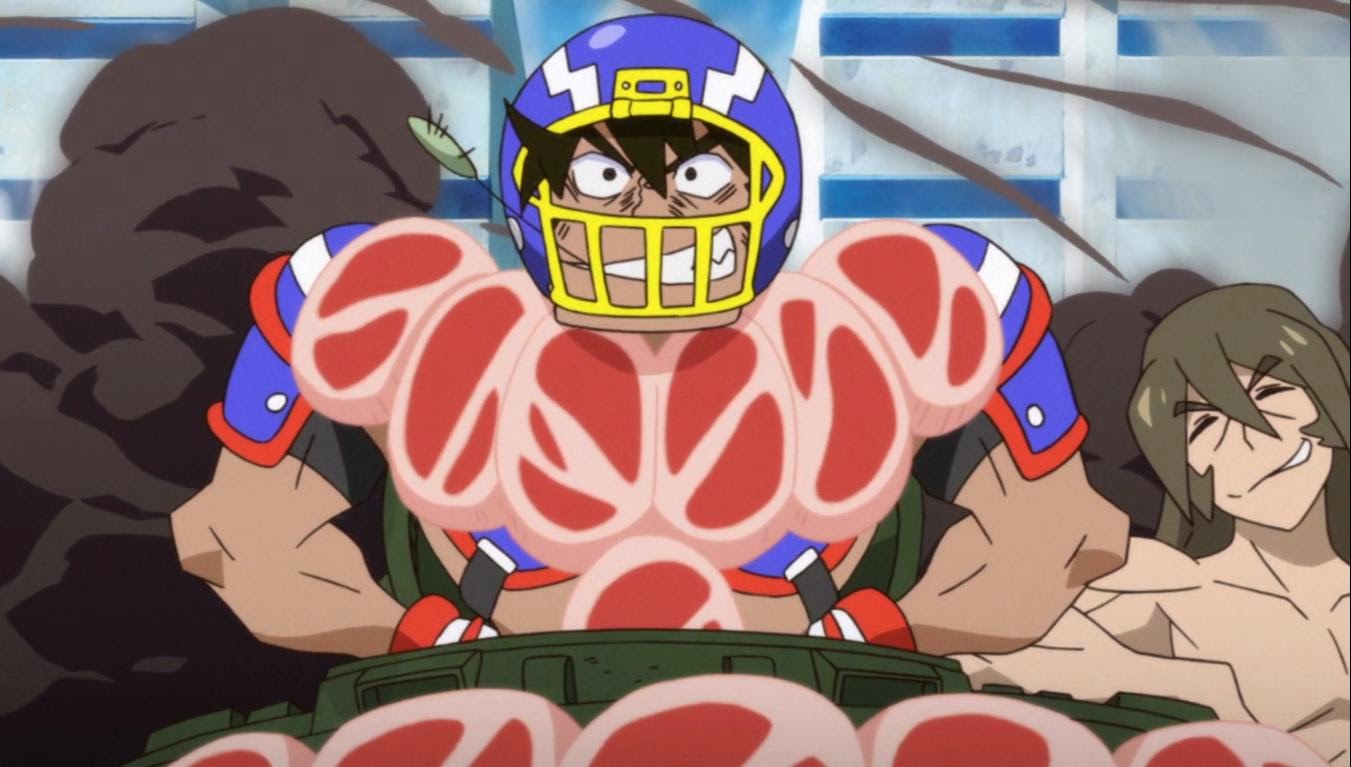 In Kobe, the opposition facing off against Honnouji is led by a representative who looks like a delinquent/gang leader Obayashi Kyuji. Not only does he dress like a stereotypical delinquent, his name has the characters for “nine” and “two” in it, a further reference to “yakuza”, which comes from the numbers 8-9-3. His second, the representative Sakuramiya Kenta, looks more sophisticated if effeminate. Kenta also joins up with the local American high school's American football team, boasting about the types of people he knows: this is a reference that Kobe itself is one of the most internationally friendly cities in Japan, as well as a base of one of the major yakuza families. (Neat point: the American football team's lines are in English, which further illustrates this.) The Kobe team, the American football team being an exception, speaks in a slight dialect different from 'standard' – and also different from Osaka's dialect. This reflects Kobe's own dialect and ways people speak there.

Osaka has also been hit historically with fires, assaults, and even bombings; every time, the city rebuilds itself as a major center.  It might get knocked down, but it'll get up again. One of the more recent examples - it regained its status as a major trading and business center even after being strafed and bombed in World War II.


These are all playing to expectations, but sometimes there's a reason for those expectations and stereotypes. In Japan, souvenirs and gifts are a big deal; so, when you are at a new place or travel somewhere, you're expected to get something that place is known for. Most often, these souvenirs involve food in some way: I remember even little zipper pulls with a mikan fruit on them, representing one of the towns I went to. Some other towns may have a landmark they use, like Mojiko Retro Town's train station. Larger places might be known for several different things, and of course, if you don't have time to hunt for the perfect souvenir, train stations have a wide variety of them: from regional Kitty-chan mascots to plush tigers to train station bento boxes (eki-ben) with foods the region is known for, in addition to your usual (to a Westerner) postcards.

Thinking of it this way, this episode of Kill la Kill might be a fun way to tell people that fun and beauty and good food can still be found - and to turn even unfortunate situations into great ones!
Posted by Kit @ 2:56 PM