the hills have eyes 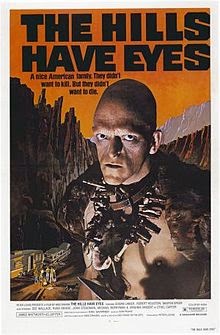 I will confess that prior to tonight, all I knew of Craven’s work was the Scream series (of which I am still a big fan, Scream III included) and the first Nightmare on Elm Street (of which I preferred the remake). I didn’t realize he was the mind behind Last House on the Left (saw remake, original coming later this month) or The Hills Have Eyes, or that he had worked on documentaries, serious dramatical pieces, and pet projects throughout the past decades working in film. I only knew him for the big-name franchises that were on my radar growing up, which made me laugh more than sent chills down my spine.

So from the moment The Hills Have Eyes opened, I was left at a bit of a loss on what to expect. I had read last month that the inspiration for this film was a time when Craven had been lost on the road, and rolled into a town full of “rednecks,” whose stares and threats had unnerved him. As an urbane, educated filmmaker, the encounter left him perturbed, but stuck in the back of his head as a possible setting for a future film. He had already worked on Last House, which was a film that had convinced him he was damning his soul, and wanted to try his hand at something decidedly less violent. So he drew up those memories in the desert, peppered them with ideas about inbreeding and psychological torture that was his educational forte, and wrote up a movie about what he expected the encounter to be like.

More than his other films, which run the gamut from bloody to abhorrent, The Hills Have Eyes takes a distinctly more psychological route. Which is what threw me while watching this for the first time. I expected something more visceral, and from the early sequences featuring the death of Beauty the dog, and the murder on “grampa Fred,” and the entire crucifixion immolation of Bob Sr, everything was moving along as expected. And then, as night passes and the freaks assault the broken down RV, the story transformed from one of violence to one of survival. Survival which sees a good chunk of the victimized family survive. Damaged, for sure, but still alive.

Every film I’ve watched so far, and most horror flicks in general, love using the “final girl” trope, whereby the sweet, virginal, compassionate female survives the encounter with evil by virtue of her virtuousness. That’s how it played out in Texas Chainsaw Massacre, that’s how Craven himself did it in Scream and Nightmare, and how Ripley managed to blast the xenomorph out into space. Virtuous characters survive, maybe a little battered, but safe.

The Hills Have Eyes throws this out the window. Virtue accounts for little when mounting a defense of your home against hill people. There’s nothing wrong with creating a trap using your dead mother’s body as bait. And do you really need to keep that RV, when you can just blow it up in an attempt to kill the Big Daddy bad guy? The Hills Have Eyes delves deep into the mindset of both killer and survivor, leveling the playing field and giving the “good guys” a fighting chance. The fact that two of the survivors are male (three if you count the dog), and the female hacks a guy repeatedly with a hatchet firmly distances this from the formula that future horror flicks take. A formula that Craven had a huge part in both creating and disseminating during the 1980s.

This shouldn’t really be a surprise to me, as Last House has a similar route (I’ve seen the remake). Craven (a major in both psychology and philosophy) loves to challenge his viewers with abstraction or difficult topics. Nightmare ponders the questions of revenge, and Scream throws the rulebook out the window entirely, making fun of it every step of the way. The Hills Have Eyes takes yet another almost Grand Guignol approach to the violent night, having the viewer cheer for the survivors as they hack their way through the attacking hill folk, sharing in the bloodlust that comes from the moment of fervent attack. Morality be damned, this is a movie about protecting your own, and if you need to kill to manage it, so be it. It might try to add some value by characterizing the villains as the product of incest, or making them cannibals, but like with any great revenge film, the fact that you sympathize with the victim is all it takes.


Now, all this said, I didn’t like the movie. Not at all. It moved too slow most of the time, and I found myself easily distracted. The visual effects are a bare minimum, and Craven makes the most of his nighttime setting in hiding the effects of violence. But competent directing doesn’t make the movie compelling to me, and somehow I expected more from the master of horror. It’s not a bad movie, it just didn’t strike me as either horror, or tense. And the ending was incredibly abrupt, with a red washed screen and the roll of the credits, hinting that the survivors had survived, but not much else mattered. Unlike Sally in Chainsaw, who laughed and cried while Leatherface danced in the sunset, this film rests heavily on just ending and leaving the audience with questions, ignoring the consequences or implications of what we had just witnessed. Effective, practically visionary for a horror film, but unsatisfying to a viewer so invested in the characters. Which is a shame, because given how much I loved Chainsaw, I wanted to love this all the same. I just didn’t.
Posted by Anime Anthropologist @ 8:03 PM