Just when I think I’ve got a solid grasp on my annual October horror project, with daily updates and a steady stream of scary stuff to devour, one well-placed anime convention derails everything. Not that I blame Anime USA for radio silence- I had a feeling I might need to do one of these massive recap posts at one point, but I never expected to be without internet for a full week. What curve balls life throws, eh?

Right before I left, I sat down to watch Alien, which was a movie I hadn’t seen in a few years (since Prometheus in 2012, honestly). I like the sequel a lot more than the original, despite the masterful use of tension and grimy ship corridors that make the single xenomorph into the most terrifying serial killer of all time. But recently I had been reading about the sad story of Alien creator Dan O’Bannon, and how the film was taken from his hands and transformed into something very ALIEN (ha!) when it aired.

For those unaware, O’Bannon had devised the script for the horror classic while writing the film Dark Star with John Carpenter. That film, which was meant to be something akin to a dark comedy about space travel, had inspired O’Bannon to create many alternate storylines, which his creatively fertile mind kept records of, and would return to while working on Alejandro Jodorowsky’s failed adaptation of Dune in the early 70s. Alien was an unused draft that would have taken Dark Star down a very different route than the cult film was known for- the beach ball that stalks the characters across the ship and serves as a mascot for hijinks was in fact originally intended to be the titular Alien that would stalk the crew of the Nostromo some years later. O’Bannon wanted to tell the story of survival in space, but constraints with funding and technology kept that vision from happening.

When the time came for Alien to be made, O’Bannon was on set every day, advising and observing the filming. However, his time in France working on Dune and the onset of Crohn’s disease, coupled with feelings of betrayal by Carpenter, had made the man more than a little bitter. He became preoccupied with losing control of his movie, a very real fear that content creators even today deal with. Finally, after his outbursts became too much, he was banned from set, rather poetically confiding in a friend to make sure the studio didn’t ruin his movie.

We all know the end result. Despite early reservations about the project, Ridley Scott made a tremendous film that might have saved science fiction, and at the very least showed us that horror has its place everywhere. However, aside from a single mentioning in the credits, O’Bannon’s role was left out of publicity, and most- if not all- of the credit for Alien is handed to Scott, despite the constant assistance from O’Bannon during shooting. The famous concept art by Giger (who had been brought on board Dune in part thanks to O’Bannon), the dark lighting on set, the Alien’s unique form and tight pacing were all part of O’Bannon’s genius, but his role has been forgotten.

I didn’t know any of that when I last watched the films. Watching them now, it sobers the movie a great deal. There is nothing out of place or wrong about Alien from a technical standpoint- it’s perfect. No director’s cut or restored versions of the film need to be seen, as it tells a complete story in the perfect amount of time. But this time around, I began searching out all the little details that O’Bannon left in from his work on Dark Star, and from interviews I read with the visionary creator. They were hard to find at times, but definitely there for the world to see. This movie’s true creative voice might be silent, but the film he created (and which he wept at the end of the premiere) is timeless.

I also watched Texas Chainsaw Massacre, albeit a few days before October officially began. I had avoided the film for no particular reason, but reading Jason Zinoman’s Shock Value kindled the desire to watch it. (That was where I read about O’Bannon and Alien as well.) I knew of the remake, and while I am always willing to give those a chance (lest I find the next Dawn of the Dead), reading interviews with Tobe Hooper about what went into filming this movie, how much realism was infused into the scenes, and how clean it actually looked by modern standards ultimately led me to the 1974 groundbreaking horror flick.

What I find most compelling about Chainsaw is how clean it actually is. The film was shot during one of the worst heat waves in Texas, in a rented house, over several intense weeks. The infamous dinner scene took over 20 hours and multiple takes. The sweat you see, and the grime on screen, is all real. It all came about because of the horrid weather conditions, and yet the final product is noticeably free of the same “atmosphere” as the remake hints for. No dust bowl level clouds, dirt caked on the walls, or tetanus-inducing exposed nails. In fact, the cleanliness of the set actually makes the movie even more unnerving: like Paranormal Activity transporting demons into tract housing, the fact that Leatherface actually keeps a clean home (bones and sculptures notwithstanding) makes the monster even more unsettling. I mean, come on- he’s butchering people with chainsaws, and still makes sure to leave a pan to catch blood drippings. That’s some serious attention to cleanliness. 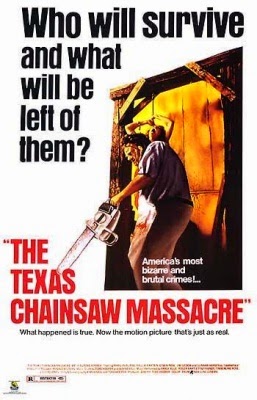 I also found that the film manages to ride the “show/tell” line pretty effectively. Case in point- I have heard people call this movie one of the most violent and disturbing films ever made. So naturally, I was expecting buckets of blood and flesh staining the walls. I expected to see decapitations or full dismemberments. I expected torture porn of almost Hostel (Part 3) level caliber. But almost universally, the moment the “money shot” was about to happen (ex: hanging that poor girl from the meathook), the camera panned away. Did I still cringe? Definitely. In fact, it was even more unsettling that I didn’t see metal penetrate flesh, it made the entire scene more real, in a purely abstract sense. It was like PG-13 horror, but done so much more effectively.

Perhaps it was the realism that pervaded the production bleeding through. Some of those scenes where poor Sally is being slapped or cut were in fact real slaps and cuts. Frustration played a huge role towards the end of filming, when long days were the norm and the crew just wanted it all to be over. Distress visible in character’s faces is often real, not unlike the terrified reactions of the Nostromo crew when the chestburster first appears, and everyone but John Hurt isn’t in on the joke. That’s a level of realism that modern horror films want to achieve, but can’t because of effects and industry regulations. One can’t torture their cast, but since Chainsaw is practically an exploitation film, seeing Marilyn Burns get so brutally exploited manages to succeed at something only the Grand Guignol had perfected up to that point- thinning the 4th wall to the point where the audience feels like they are taking part in the crimes on screen, instead of just watching it.

Tonight I plan to view The Hills Have Eyes, so maybe more of this 4th wall breakdown will be there. In either case, I have high hopes for these classic films, since I’ve got so many to watch this year.