The time has come. With three days left in this rundown of 2014 anime, it’s time to finally center a piece on the show that dominated my year, opened my eyes (and mind), and influenced me more than any other series I watched this year...or any year in recent memory. A wonderful blend of obscure references, flashy art, over-the-top characters and storytelling, and more fan-service than I am usually willing to indulge.

First off, I know for a fact that I’m not the only one writing about this show for this project. Kill la Kill is as synonymous with 2014 as Attack on Titan was last year, and Madoka Magica before that. It’s one of the most visible series to come out recently, and has creatively inspired countless cosplayers and artists. And anyone who has seen me at cons this year knows how big a deal this show is for me as well. I’ve practically (or literally) yelled about this show at some 19 conventions, podcasted about it, blogged about it (in one case, for an upcoming journal), and spent copious time putting my thoughts to paper for my first e-book. This show was lightning in a bottle for the flagging anime fan in me: it came around at the right time, and re-ignited my love for anime and all things Japanese. It literally was THE SHOW for me.

But it all started with a single scene. 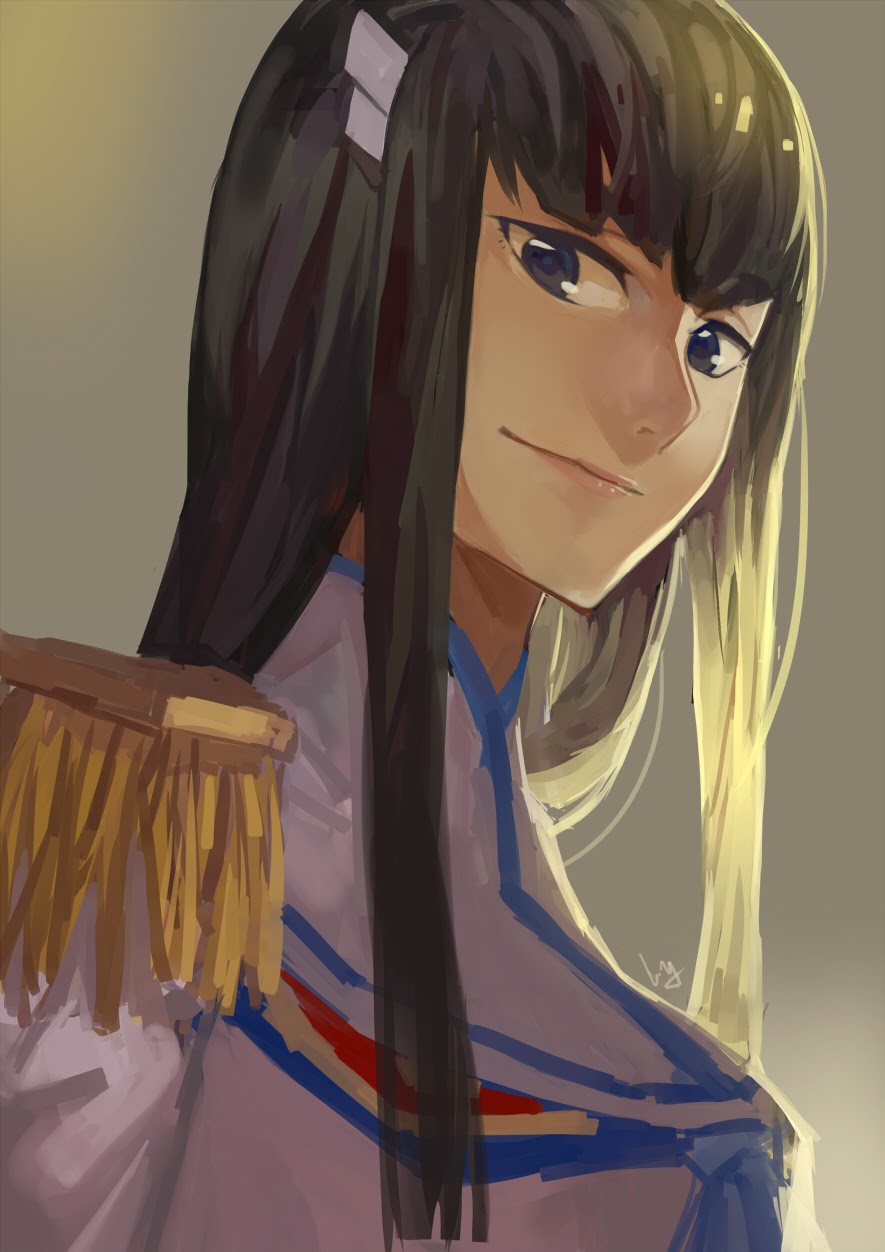 By now, my story about watching Kill la Kill for the first time is old hat. Sitting in Starbucks, taking a breather from a massive tome on yokai and Japanese history, I decided to see what all the fuss was about with this new show. I’d read it was classic, evoking the same sense of wonder and enjoyment that brought a lot of my friends into anime in the first place. And of course, from that opening sequence with Gamagoori pounding on the No-Star, I was caught up in how much it reminded me of Gurren Lagann, and all those 90s shows that were my first experience with the medium.

And then she appeared, the radiant goddess, most beautiful of all 2-D girls, standing there atop her citadel, and ready to enlighten her people to the “truths” of the world. She yelled at “me,” and I was forever hooked. Here was a modern, lovely, and compelling iteration of the Sun Goddess herself, and she demanded my adoration and respect.

(And believe me, that doesn’t happen very often, especially with anime characters. You could say that at that point, Kiryuin Satsuki became my “waifu,” the strongest anime crush I’ve ever had, and one that persists even now.)

A few posts back, I called attention to those moments this year when people have approached me and told me how my panels and lectures have influenced their lives and driven their own pursuits forward. How inspiration can be compelling, and can hit you like a truck when you least expect it. 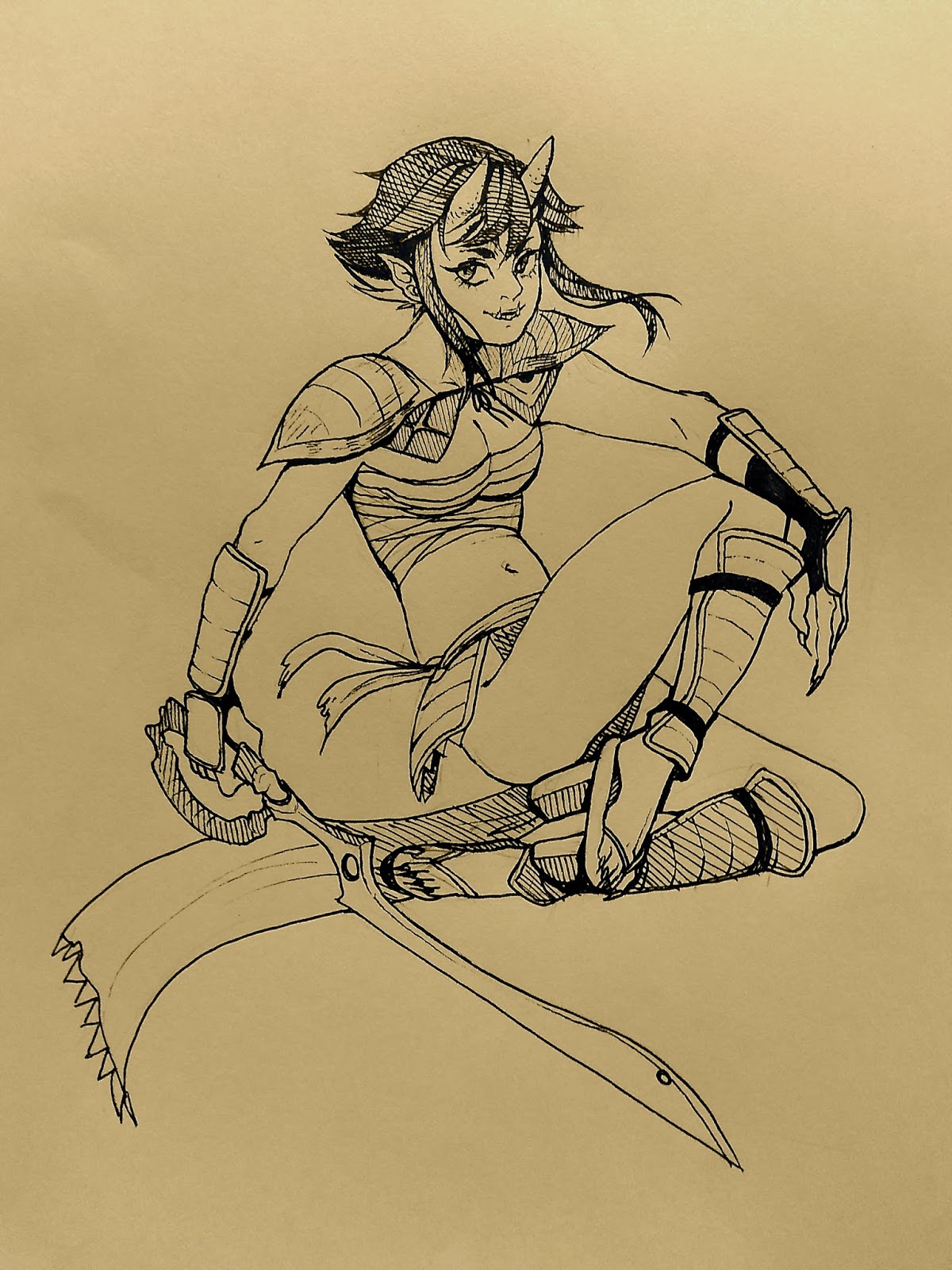 The idea for what would become Shuten Doji vs State Shinto happened in January, when I was mulling over Ryuko’s role in the series, and how it could fit into the State Shinto cosmology I had been assembling piecemeal for the Shitenno and their Radiant Sun Goddess. Somewhere along the way it got into my head that she looked, and acted, like an oni. The horns, the blood, the violent resistance to fascist order- it fit in with some lore I had read last year. But it hit me HARD. In a moment of clarity that could only have been made better by shouting “Eureka” at the top of my lungs, I grabbed my copy of Noriko Rieder’s excellent “Japanese Demo Lore,” began scribbling down ideas on a post-it note, and running home from the bookstore. Kit might still even have the text message. That was where it began.

Rieder’s book got me interested in the otogi-zoshi, Japanese Muromachi period folk tales. Research into those tales and their traits drove me to research both Buddhist concepts of emptiness, and the history of Inari in Japan (and particularly how Inari is approached and worshipped). A desire to know more about the Japanese “identity crisis,” hinted at in books I’d read years ago, led me deep into the Postwar period, a time I had only superficial knowledge of. That led me to Embracing Defeat and Japan Unbound, which clued me in to more books on Hiroshima and its fallout, motivated me to finally devour Showa-Shi, and spend real time speaking with Japanese friends about their own family experiences.

As my knowledge of Japanese history increased, as points of information were challenged and changed, as my body of knowledge grew, so too did my relationship with the series that had inspired me. And in turn, so did the panel that had started at a way to focus and commit to text my ideas, so i could share them with my fellow fans. While all my panels evolve as I learn new things, with Kill la Kill that evolution happened rapidly, was spurred on by my ravenous consumption of new ideas, and transformed me just as much as it transformed my material. It’s been a year-long process, with those moments of clarity happening more and more as my reading list became longer and longer. 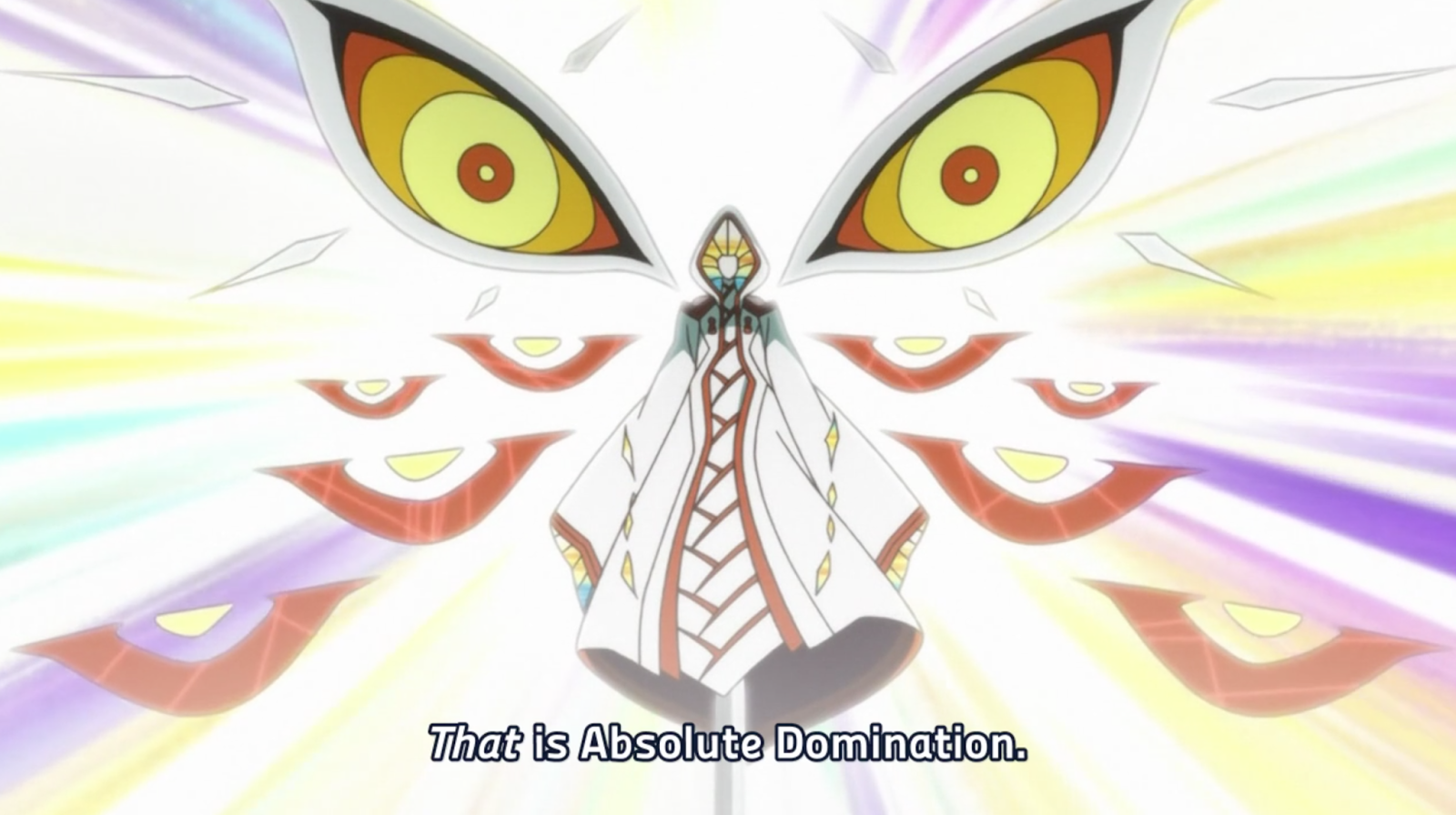 One of the best things to come out of this entire project wasn’t the panels, or the books, or the long discussions I’ve had with people- it was how Kill la Kill motivated me to read more about Japan than I ever had previously. I watched fewer anime this year, read fewer manga, played fewer games, than in the past five at least. But at the same time I discovered more about Meiji, Postwar, and contemporary Japan than I’ve ever known.

And honestly, it’s been one of the most validating years I’ve ever had. Prior to discovering Kill la Kill, my interest had been in yet another slump, as burnout slapped me silly and kept me trapped in a little bubble of ennui and old video games. All it took was one moment to motivate me, and subsequently turn my year around. Half the fun has been the lectures and the book writing, but the other half has been the welcome craziness of discovery and strengthening my knowledge of Japan. That same sense of seeing things in a new light that attendees have told me my panels brought them, brought to me by skimp clothing and a massive crush on an anime girl.

On the tenth day of anime...I found my inspiration, dressed in a sexy school uniform.

As an aside / addendum:

We've talked about this before, but the idea that Satsuki represents perfection and Ryuko doesn't partly explains why they appeal to me so much. They contain both harm and well-being individually, but it takes both of them working together to balance each other out.

Bear with me here. 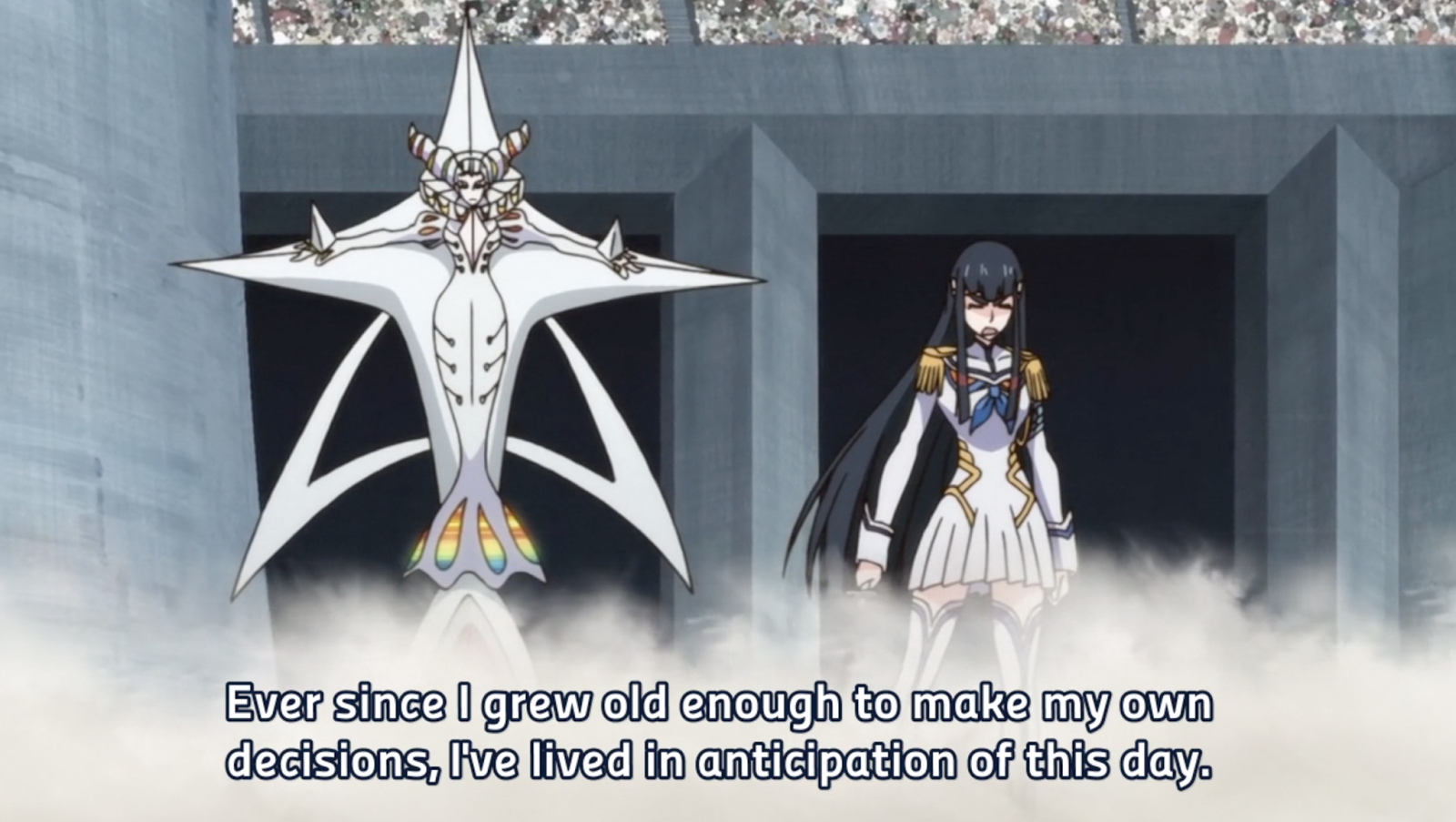 Satsuki is the ideal of the person I want to be: she is a survivor, but skilled against manipulation and mental/emotional tactics. That's not to say that Ryuko isn't a survivor either: but where Satsuki excels in the mental and emotional sides of things, the "skyscraper in your mind" technique, Ryuko excels in being more physical. She is more stubborn and manages to keep standing despite everything that's (quite literally) thrown at her. She's blunt, and wears her emotions on her sleeves - if anything, she's too passionate, to the point of Senketsu pointing out that she's going to run herself into the ground if she's not careful. When Ryuko despairs, it takes physical things like food and shelter and clothing to soothe her: when Satsuki despairs, it's not so much the physical chains as the metaphorical ties that bind.

And yet, when they work together, they find balance. Satsuki realizes she needs to take more full-frontal action, while Ryuko starts understanding the more emotional sides of things - that Satsuki was expressing her own sincerity and desires just in her own quiet way.

I'd presented with Charles before on panels, but the Kill la Kill panel was really the first one we'd built from scratch with both of us in mind. And even though it can use some polishing even now, it is balanced. Not too passionate, but not too subdued. Accessible, and yet awesome.

It even helped me remember my Japanese, and to be more confident - things I'd thought I had lost.


So thank you, Studio Trigger, and Aniplex, and everyone. I found balance and  harmony in a story about two sisters who needed each other all along. - Kit
Posted by Anime Anthropologist @ 12:22 PM