12 Day of Anime: Yokai Can Feel the Christmas Spirit

Christmas is often called the season of giving. We all hear the old adage “tis better to give than to receive,” and the airwaves are full of stories and images of excited recipients of unexpected “Christmas surprises,” of which the giver occasionally remains anonymous. Right there alongside the excitement of opening presents, we are consistently reminded of practicing charity, compassion, and mercy- all values that are universal, but particularly emphasized this time of year.

Earlier, I wrote a long essay on the film A Letter to Momo, focusing on how the power of love can extend beyond death, and the impact the departed have on their surviving loved ones. But right alongside that message was another, hidden behind the hijinks of crafty yokai Iwa and Kawa, and revisited repeatedly as the film reached its climax. Altruism, selflessness, can be just as powerful as love. Particularly since altruism often transcends family ties.

Iwa, Kawa, and Mame have been sent down to earth to watch over 11 year old Momo by her deceased father while he undergoes the spiritual transformation from human to family kami. Momo’s father’s love is selfless an unconditional, even after the fight that was their last communication, and he sent down three “imps” to watch over her and her mother. Since he cannot be there, he makes arrangements for their safety, and hurries on to what comes next. 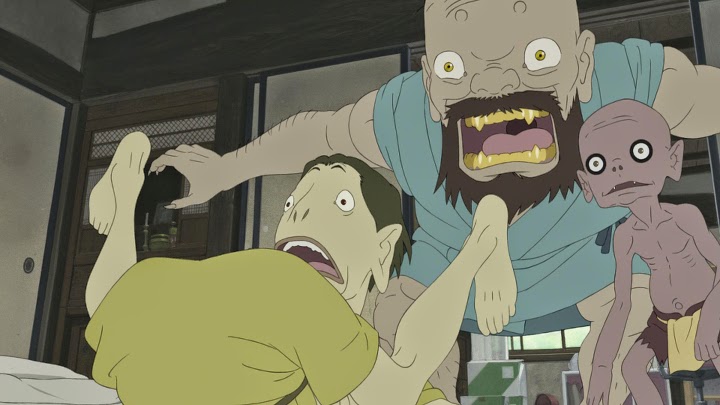 But Iwa and Kawa, an open-mouthed giant and his kappa-like sidekick, have other plans while on Earth. Rather than spend time ensuring Momo’s wellbeing, they play pranks on her, eat all the food in her house (and the village), and tell wild lies about who they are and why they are there, also at poor Momo’s expense. Much of these pranks are played for laughs, benefitting the obviously bored yokai, who get a rise out of seeing Momo lose her temper and snap at them. They get her into trouble for the benefit of their own amusement, and put Momo’s safety in jeopardy on more than one occasion. Despite being sent to protect the girl, their rampant selfishness has the opposite effect most of the time, and their responses are little more than shrugs and snickers.

Then Iwa makes a critical mistake: using Momo’s most prized possession- a letter her father started to write, but never got past her name- to send a report back to their celestial handlers. His half-assed attempt to follow the bare minimum of his duties practically destroys poor Momo. The girl, already having a rough time coming to grips with her father’s death, and feeling equally guilty about causing excessive stress to her mother during this trying time (itself a bit of selfishness the girl needs to confront later), finally snaps, and in that moment, Iwa realizes the depth of his failure.

Now if Iwa were a typical yokai, he might have laughed at the girl and went on his way, but that was definitely not the case. Iwa (along with Kawa, and Mame) was in fact being punished by forces up above, cursed with an unending hunger and a compulsion to work off karmic debt through serving as guardians for those below recently bereaved. Even so, he still lived a life full of resentment, self-pity, ennui, greed, and selfishness. And what was worse, he didn’t care, apathy being expounded by his constant hunger. His associate Kawa, in the same boat, eggs him on to keep shirking the duty for the sake of their own comfort, but seeing Momo’s tears gives Iwa pause, regret, and finally empathy for the girl. He has to make it up to her, by any means necessary. Even violating his divine oaths, breaking the rules of being a guardian, and knowing full well he is sacrificing any chance at forgiveness by doing this one good thing for Momo. 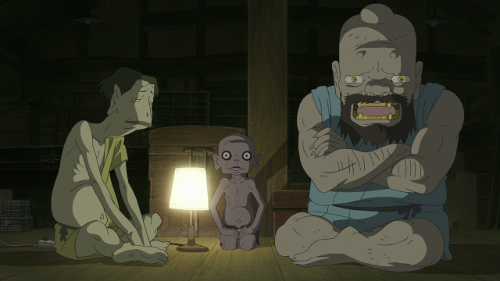 People think of Christmas as a time of family, a celebration of love, or a reminder of how much consumer culture rules our nation. But we can’t forget that part of the Christmas spirit (or, if you want to really be theological, ALL OF IT) is embodied within the birth of Jesus Christ. Regardless of whether you view him as the son of God, a rabbi or holyman, or some kind of Western Buddha, the story of Jesus is one filled with selflessness, sacrifice, and compassion. For the son of a carpenter and “teen mom,” Jesus was one of the most loving, thoughtful, merciful, and compassionate humans ever to walk the face of the earth. His recorded life was full of selfless deeds, and his death was a moment of sacrifice meant to save the world from sinful urges and selfish thoughts. Even if you don’t subscribe to the divinity angle, even if you think the entire story is one huge chunk of propaganda, you can’t forget that the original message message behind Jesus is one that screams LOVE THY NEIGHBOR. Even if thy neighbor is selfish, or conceited, or a downright ass, loving them is more important that letting hate make decisions.

Now Iwa has been the biggest ass of all time to poor Momo. He’s allowed his own laziness to cause her more trauma, which in turn will lead to a stern lashing back in heaven. So rather than try to weasel out of it, first he protects Momo as she runs out into a storm (which ends up being Momo’s big, selfless sacrifice during the film), then he use whatever influence he can muster with the powers that be to give Momo the one thing she needs. Not her letter, but what her letter represents to the young girl. 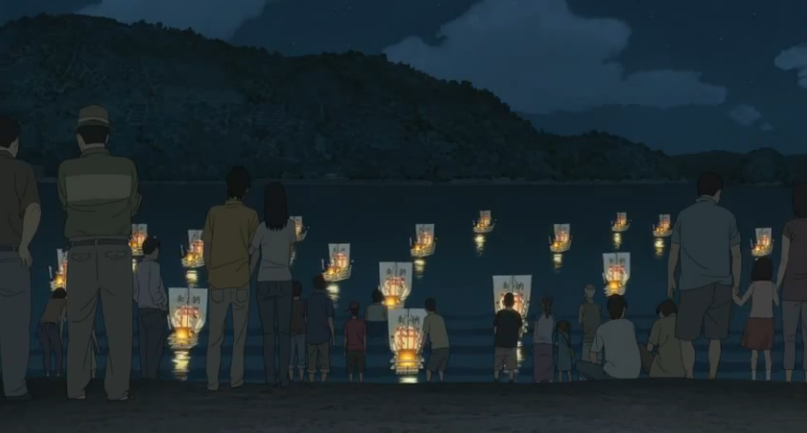 As the movie draws to a close, Momo and her mother stand on a beach, watching as lanterns released by the entire town fly higher into the sky. But before they can leave, one returns to land, bearing a single sheet of paper, with Momo’s name across the top. As the girl unfolds the paper, words being to appear- a message from her departed father. Overcome with emotion, Momo cries tears as her father’s final missive is completed there in her hands, saying the words she had imagined since his death, giving her the closure she desperately craved. It is Iwa’s gift to her, collapsing the boundary between life and death, and giving a little girl one last chance to hear from her father. Before arriving on earth, the imp was self-centered and chafed under his duties, but after that one encounter with the scared, lost girl, he discovers that sometimes doing for others is more comforting than doing for yourself.

It’s cliche to say that somewhere over the course of the movie that Iwa “discovered the spirit of Christmas,” but when you take a step back, isn’t Iwa demonstrating the same altruism that supposedly fuels that spirit of the holidays? It IS a holy day for Momo’s new home, one full of celebration, lights, and life. The yokai just decided to piggyback on that and give Momo the closure she needs. He grants her the “christmas miracle” there on the beach, and helps a little girl believe again.

On the 9th day of Anime...I almost cried, because even monsters can sometimes be human.
Posted by Anime Anthropologist @ 11:49 AM