“What if I told you that there are more than 24 hours in a day?” 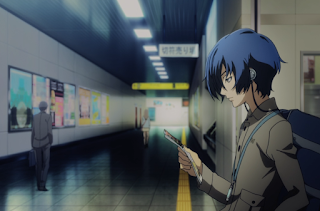 On 7/13/2006, the role-playing game Persona 3 was released for the PlayStation 2: after years of silence from the Persona franchise, this title renewed the franchise, helped bring us Persona 4 (again, for the PlayStation 2), and was featured again in Persona Q (Nintendo 3DS). There is a set of four animated feature films for Persona 3 airing in Japanese theaters as well, one based off of each season: the first one entitled Spring of Birth, the second Midsummer Knight's Dream, and so on.

But why did Persona 3 capture the imagination?

After all, it seems very violent: the Evokers used to summon the characters' Personas takes the shape of a gun, so it often looks like (upon Persona summoning) the characters are shooting themselves. There is much talk of Death, of time, and how it comes for all. Even the imagery of Tartarus, the dungeon, seems like something out of nightmare: the walls oozing blood or ichor, the abnormally full moon shining through as if grinning at the party.

But at the same time, Persona 3 carries a message of hope – of fighting against the darkness. The main protagonist, who in the films is called Makoto Yuki, is shown to suffer from trauma due to the deaths of his parents in a mysterious accident 10 years before the events of the game: and surprising even him, Makoto does not seem to care whether he lives or dies. Most of his decisions are what might be interesting to him, or because he has no strong feelings one way or another: this is someone who has lost their passions and dreams. This may reflect the “depressed generation” of Japanese people who grew up after the economic bubble burst: that is a topic for another day, perhaps. But what we are shown, is someone who has to learn from those around him about life and connections, especially when he is made the leader of a group called SEES – ostensibly an after-school club, SEES is actually meant to combat the mysterious creatures called Shadows that plague the city, and investigate the mysterious Dark Hour phenomenon, the “hidden hour” that takes place at midnight every night, and the secrets of Tartarus. He has to learn to fight back – somehow – and figure out what might be worth fighting for. And in the fantastical world of Persona 3, you can fight the monsters head-on with swords and baseball bats; you can fight, and you can win.

All that's built up over the course of the game, all the little interactions, or the little storylines of the people you meet along the path of the story, build up to the climax of the story. Not only is there the rich symbolism that the Persona franchise is known for, but Persona 3 introduces the Social Link system, encouraging you as the player to find out more about the other characters in the game by spending time with them. As you spend more time with them, you get to know their problems - and see them overcome, or get closure. These Social Links range from stories of abandonment to divorce anxieties to even just anxieties about growing up and becoming an adult. There are other stories too: you adopt a dog called Koromaru (modeled after the famous story of Hachiko) whose loyalty and closeness to his deceased owner seemingly helped him gain the power of Persona, an alternate self to use in combat. You encounter Strega, another team of characters who can use the mysterious power of Persona just like your team – only their motivations are more about power, and holding on to it. As the player, you also see one of the teammates grow from having a massive hero and inferiority complex to realizing that being the hero isn't great, and that he was already good enough to begin with. You delve into stories of revenge, of tragedy, and into the linchpin of it all – the incidents that happened 10 years ago.

(Author's Note: In Persona 3 Portable, if you play the female protagonist, the story is a bit different in that she seems to have more of a connection to life.)

And in the end?

In the end, there is a sacrifice, but the sacrifice is meaningful because of the very journey it took to get there: and it helps to show the value of each of our lives.

Life – with all its sadness, strangeness, and wonder - is worth fighting for.
Posted by Kit @ 2:37 PM