beyond the bugmen: part II

Kamen Rider OOO, pronounced O's, is the next series in our look at the Kamen Rider franchise under a microscope. Airing from September 5, 2010 to August 28, 2011, the series follows Eiji Hino, a wanderer with a tragic sort of backstory, and a desire to help others. Soon after we meet Eiji, we are introduced to his “sidekick”: a floating hand named Ankh. Ankh is one of the Greeed (no, that is not a typo), a race of monsters that are made of coins – silver coins called Cell Medals make up their physical forms, and the Core Medals (each with its own color scheme and animal motif) make up their actual being. The Greeed create monsters from humans' desire, and hunt down their Core Medals so that they can take over the Earth, as they had tried to do 800 years ago. 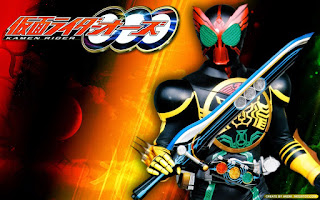 In OOO, more than almost any other Rider series I've seen to date, the theme is so easily seen. Eiji represents a selfless hero, giving up all he has to save others, and even keeping little for himself outside of the fight – he believes that as long as he has a pair of underwear, a little money, and somewhere to sleep, he needs nothing else in the world. This actually starts to become a problem, as Ankh wants his Core Medals back, and will do anything to have them. He can't fight, though – which is why he helps Eiji to transform into OOO in the first place. When he starts putting innocent lives in danger, Eiji makes him promise – either he starts paying more attention, or he'll never transform again (mind you, this is while both of them are dangling from a collapsing skyscraper). 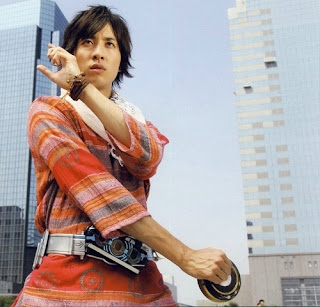 Later in the series, the emphasis begins to shift – rather than simply following the fight between Eiji and the Greeed, we see a fight between three sides of the Greeed. Uva wishes to gather Cell Medals to boost his power, Mezool tries to keep the group together and find their Core Medals, and Kazari flip-flops between the sides of the Greeed. In the end of the series, things happen that make Eiji realize that being entirely selfless is just too hard, but being too greedy is not good, either. So, he's left to take a pragmatic view on greed – want and desire for things, but do not be afraid to help others.
Posted by SymPhoenix @ 4:15 PM