beyond the bugmen, part III

Kamen Rider Fourze (September 4, 2011-August 26, 2012) is the first chance that I have to bring up that a lot of Kamen Rider series have various teams from the anime industry working on them. In this case, the head writer for Fourze was Kazuki Nakashima, who is best known for Tengen Toppa Gurren Lagann and Kill la Kill (readers of Study of Anime will know that we all love both of those series here). The writing style definitely shows – it's a very energetic, bombastic series, set in a school called Amanogawa High School. Kisaragi Gentarou is our main hero, a pompadoured prime example of the “delinquent” trope. 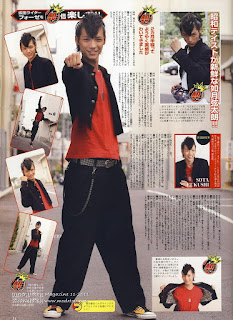 You can't see it here, but he has the GOOFIEST smile.

But he's the farthest thing from it – Gentarou is “the man who will befriend everyone in this school” as he says in the first episode. He is generally a very upbeat, friendly character, completely going against his appearances. He's joined by a group of students that supplement his ability to use the Fourze Driver, either with knowledge of the various Astro Switches, or knowledge of the school itself. It's a series very driven by friendship, and it's very rare to see one of the monsters outright destroyed – I can only recall one instance of a defeated monster never being redeemed. This is crucial to the theme of the series, and it's pretty apparent why they chose this sort of series when you look at the time around it. 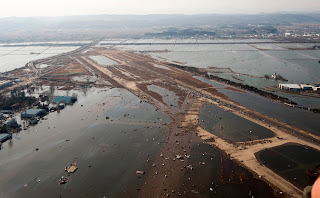 Sendai Airport flooding after the Tohoku earthquake and tsunami.

The Tohoku earthquake and tsunami struck Japan on March 11, 2011, and the ensuing disaster conditions were hard on the whole country. From power and water outages, the meltdowns at Fukushima, and more damage, the country was struck by disaster. In the timeline of Kamen Rider production, around March of every year, the series for the following year begins its production and writing. Fresh off the heels of the earthquake, the production team ended up making a cheerful, uplifting series that still manages to hit hard (I legit cried at the end of this one, y'all).

Remember that last section when we talk about our next series, because despair becomes a VERY important plot point...
Posted by SymPhoenix @ 9:30 AM