Friends and Diversity, by Rorschach aka Dakota Schuck 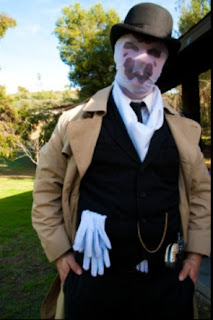 I have been attending anime conventions for over 4 years and have made many diverse friends, and when I say “diverse,” I really mean it. One thing about anime conventions that has become plainly evident to me over the years is the extreme broadness of the demographics represented at these events.
To illustrate this point I will draw from my own pool of personal friends whom I know through cosplay and conventions: I have met several illustrators, artists, costume designers, and musicians through anime conventions; there is not much of a surprise that these artistic types would be attracted to the cosplay subculture. However, the list does not stop there; others I have befriended at anime conventions include several ex-military personnel (mostly Marines and Navy), a surgeon, research scientist, truck driver, rancher, stuntman, and an anthropologist (whose website I am currently writing for). The diversity of the careers represented in the above list is by no means exhaustive, and this is not to place a limit to the eclectic mix represented at conventions, as these are simply the people I, as one individual, have personally befriended.
Not only are the careers of convention attendees widely varied, but the same can be said for the socioeconomic backgrounds of we super nerds. Again, drawing from the con-goers I know, there are cosplayers from the upper segments of society like a friend of mine who lives in a snazzy southern California mansion. On the other side of the spectrum are people I know who sleep in their cars and spend months saving enough money to attend a convention.
Another area in which my Cosplay friend group shows unusual diversity is that of age. As a 20 year old college student, I have good friends ranging in age from 15 to 30 years. These examples are only a fraction of all the diverse demographics represented at the nerdy havens called conventions. Cultural, ethnic, and religious differences are also widely varied—and accepted.
The interesting thing about the anime convention crowd is that these differences are mostly ignored at conventions; people are more likely to be judged by costume quality, nerdiness, and how fun they are to be around.
Posted by Anime Anthropologist @ 2:16 PM