Ever since I "discovered" Geek 2 Geek about a decade ago, I always wondered about the role fandom plays in relationships. Over the past five years, I've met more than my fair share of "con couples," people who met through the con, or through fandom in general, who have allowed geek pursuits to influence their relationships, and nurture connections. I've met teenage couples who use the con as a "judgement-free zone," where they can be themselves without fear or regret. I've met gamers and LARPers who met their significant others through the medium. I've even met couples where "the geek" brought her decidedly "non-geek" boyfriend to the con, only to turn him into one later.

And I'm sure a lot of you have likely met more than a few as well. 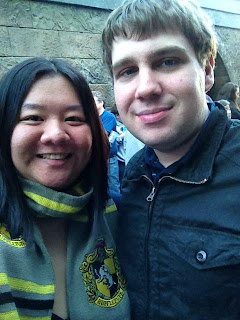 It’s a fairly common exchange between my girlfriend and I whenever we try to make plans for some event in the near future.

“Oh yeah… what about the week before that?”

“Right,” I respond, having a vary vague recollection that there was something we were doing at the beginning of that month. “And the weekend after that?”

“That’s the karaoke birthday.” She swipes through our upcoming agenda from the calendar on her iPhone. “Actually, we’re pretty much booked until Otakon in August.”

May just started and we already have our weekends booked months ahead of time. Conventions. Festivals. Concerts and shows. Geeky get-togethers. But that’s the way it’s been for most of our two-year relationship.

It was November 2010 and I had been single for the longest time since I started dating. I opened an OkCupid account hoping to be able to connect with someone new, but was ultimately rejected by the few guys I had met. I was feeling kind of in the dumps and decided I was done with dating.

At that point I thought it would be fun to change my OkCupid account to everything Scott Pilgrim. I was obsessed with Scott Pilgrim. The movie had recently come out and I had just finished rereading the entire series. I put up a picture of me cosplaying Ramona and each section of my profile had quotes about a different ex boyfriend from the story.

The year 2010 had been very good to my love life thanks to a comic book character that just so happened to share my name. I was a huge fan of the Scott Pilgrim series for a number of years, and as the franchise was about to reach its highest peak with the release of the Michael Cera film, I found it to be the perfect icebreaker for talking to the ladies.

I had this up for about a week and I was rather proud of the work I put in. On November 22, after about a week, I decided it was time to return my profile to normal and eventually delete the whole thing. Just I began changing my profile back to normal I received the following message,

I was Scott Pilgrim for Halloween this year because, well... my name is actually Scott and it was a pretty easy costume to put together. :-)"

Michelle wasn’t the first girl that was swayed by the Pilgrim pickup line. I had been dating a girl a few months prior to that who was also a huge fan and would frequently make comparisons to the fictional character and me. We saw the movie together opening weekend. We read the final volume together that summer. We had costumed as Scott and Ramona that Halloween.

But the Scott Pilgrim connection was where our fandoms ended. She never could understand my interest in Japanese pop culture and had no interest in anime outside of My Neighbor Totoro. When it came time to go to the New York Comic Con, she wanted no part of it.

“I think you might enjoy it,” I assured her, “there’s actually a huge female presence at these type of things. The anime fandom might be split 50/50 between genders, maybe even more women than men.”

“Yeah,” she said, completely brushing off my statement. “It’s just that you know that the guys who attend that kind of thing would… how should I say… eat a cute girl like me alive. They’re awful.”

So I went to the Comic Con by myself that weekend and this bad impression stuck with me until we broke up with her a few weeks later.

I was relatively new to the con scene. Otakon 2009 was my first convention. After that it was PAX East, Otakon 2010 and NYCC. I was hooked after Otakon and PAX East sealed the deal. Conventions became my second home.

Trying my hand at OkCupid again, I came across another girl who was into Scott Pilgrim. So I ran my pickup line to her again and after a little bit of back and forth I discovered that she was also at Comic Con the same weekend that I was, and at the Otakon I was at a few months before that. In fact, she loved going to those cons and couldn’t wait to go to them again.

This was someone I could actually share my fandom with.

After learning that Scott had attended a few of the same cons I did, I became very excited. We talked for hours about Scott Pilgrim, video games, and anime. It turned out our anime fandom was what truly bonded us together.

In the beginning, conventions were a way for us to spend a long weekend together. I had been living in PA and he was living in NJ, so there was a bit of a distance. Conventions were my excuse to spend more than two days a week being with him, and for us to really share our love of anime together. He introduced me to a few of his anime blogging friends and from there I’ve even made some close friendships with members of the blogging community.

About a year and a half into our relationship, Scott asked me to move in with him. I packed up my things, left Pennsylvania, and became a New Jersey resident. One of the first things I did upon arriving was putting his anime girl figures and mine together in a shelf. And then a week later, we were once again driving down to Baltimore together to share a weekend of Otakon.

As time went on I got used to seeing Scott every day, but when convention time comes around I am still excited to be able to spend a weekend together and enjoy our fandom. Even as I write this, I’m looking at my calendar and getting excited about all the conventions that are coming up.

Conventions have been our biggest connection to each other and the fandom we share, and I don’t see us giving that up any time soon.  We fell in love through fandom and our fandom gives us a great way to share our love together.

Posted by Anime Anthropologist @ 1:29 AM