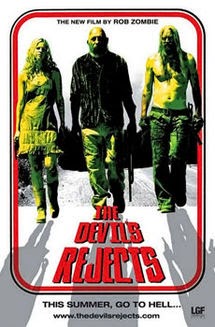 Greetings, fellow lovers of horror! As it is once more October, this humble fan of the bloody, the creepy, and the diabolically gratifying will again walk down the path laid out three years ago, when a series of horror movies allowed me to break myself of a crippling addiction to World of Warcraft, and indulge the joy in both the month of October, and the holiday of Halloween.

Now while I might be tempted to spend a few paragraphs talking about how American society manages to mess up one of the most sacred Northern European holidays by making it about candy and pranks (well, not the prank part), I will refrain...today. Maybe a future post will take consumerism to task for polluting what should be a solemn harvest festival with commercial bulls**t, but for now I want to indulge in some of the more simple pleasures the October season has to offer.

Namely, scary movies. As I wrote before, I’ve been doing this for a few years now. In 2011, it was a bunch of cheap thrill flicks, meant to take my mind off the addiction that had devoured a good chunk of my life of the past 6 years. It served it’s purpose quite well, in fact, by reminding me how much I like October as a month, and how much fun I have getting ready for Halloween. Not the holiday itself, but rather the build up: haunted house attractions, shorter days with long night walks, pumpkin EVERYTHING, and the decidedly fun TV specials on shows I like.

(And Halloween is also right before Nekocon, which no doubt contributes a bit to the contact high, as I prepare for a great spooky holiday, and one of my favorite anime cons right afterwards.)

For the 2012 “festival,” I recorded some of it on Real Otaku Gamer, nothing huge, just calling attention to the fact that I did something quirky and fun for October. For 2013, I used my often neglected tumblr to post daily reviews of whichever movie, attraction, or game I had played. Very much on the down-low, but the posts are still there if anyone wants to see them.

For this year, to mark the fourth time I am doing this, I plan to put all the updates here, on StudyofAnime. I will say right now that few of these will be anime-related, but if anyone read my heartfelt confession a few weeks ago, this should come as no surprise. There will still be anime updates and the like, as always, but in between them will be a steady stream of horror, terror, comedy, and cheesy effects, found wonderfully in those movies we all love.

So let’s get down to business. Tonight’s film is The Devil’s Rejects, sequel (or prequel, or whatever) to Rob Zombie’s splatterpunk masterpiece House of 1000 Corpses, one of the most twisted, but entertaining, horror films of the 00s. At a time when so many of our movies were coming from Japan (The Ring) or being remade from classics (Texas Chainsaw Massacre), that film was fresh, funny, and full of blood and guts, sometimes liberally applied to the walls. I watched it for the first time in a motel room in North Carolina, and the power went out just as it finished, so needless to say, there was a lot of incidentals that made the experience even more entertaining.

The sequel picks up some time after the first movie, with the murdering, Satanic Firefly family being ambushed by police. In fact, the entire 17 minutes that open the film feature a fantastic gun battle, dudes in metal suits, and more swearing than a sailor on shore leave. Protagonists Baby and Otis survive this bloodbath and flee into the woods, kill a woman on her way to work, jack her car, and drive off into the sunrise while “Midnight Rider” plays the movie to its true opening (and earning itself a place on my “Killing Music” playlist, if only for the sheer bad-assery of being there).

Cut to a scene of the brilliant Sid Haig, clown makeup and all, getting ridden by a...woman of ill repute, who then threatens to shoot him for calling her a whore. Just when things are getting really interesting, it’s revealed to be a dream, whereby Haig’s Captain Spaulding (who was still in bed with a woman of equally dubious repute) is informed of the morning raid, and has to begin his flight from the law, meet up with his daughter and her homicidal lover, and somehow get out of Texas.

Along the way, they murder an entire family of performers (one of them dying by happenstance, which was also one of the more comical death scenes in the movie); get hunted down by Danny Trejo, Diamond Dallas Page, and a superb William Forsythe playing the most vigilante cop I have ever seen, Dirty Harry included; and become trapped in their own horror movie, as the sheriff decides to torture and kill them in similar fashion to how they killed their own victims. There’s some plot thrown in there involving the sheriff’s brother, comments about sodomizing chickens, buckets of blood, and a fantastic gun battle at film’s end. All in all, just what I would expect from professional hellbilly Rob Zombie, who’s writing is as “Zombie-esque” as ever.

In many ways, The Devil’s Rejects shines just as bright as its predecessor. Sig Haig is phenomenal. Sid Haig is usually phenomenal, but here he’s dirty, grimy, with horrible teeth, and a laugh that makes your flesh crawl. The perfect “scary patriarch,” and bind that brings together the old and new schools of horror. This apparently was Zombie’s intent- he wanted a 70’s style horror film, and went to great lengths to create one. The atmosphere chews as much as Haig does, and tells the story of decaying Americana in visceral terms. Give me a book of dirty cult dwellings, and I’m happy most of the time. I loved just watching this movie, much like I enjoyed watching Texas Chainsaw Massacre.

The kill scenes are also well done. Not flawless, but practical enough to make me cringe on more than one occasion. When Otis disposes of two performers despite being ambushed during the midpoint of the movie, it felt real. I kept rubbing my head and my leg, unable to look away but still feeling uneasy. There’s a raw emotion to the way this movie creates and disposes of characters, and that adds to the charm.

As to be expected from a musician-turned-director, Zombie incorporates music very well into the final product. The closing sequence, set to Freebird, demonstrates this. Slowed time, flashbacks, drawn guns, and a sense of optimistic doom are enhanced by use of the southern rock standard, which provides a fitting eulogy not just to the Firefly’s, but to all their victims over the past movies. It’s an ending, which is something many horror films lack, but The Devil’s Rejects puts a period on. The movie opens with a rambling poem, and ends with a coda, which just makes everything feel satisfying and complete.


All in all, this wasn’t my first choice to open the festival, but it fit. The Devil’s Rejects plays its part, and while not pushing standards in 2014, it has a charm still found in watching the horror classics. Its original enough to be fresh, while still paying homage to nostalgia and twisted memories from long ago. I read a review of this movie earlier this summer, which called it one of the best horror films to watch once, then never again. I think that sums it up nicely. Fans need to see this movie once, then bring it up in casual conversation about horror films for years to come.