beyond the bugmen: part V

What to say about Kamen Rider Gaim (October 6, 2013 - September 28, 2014)? Well, to start with...as I alluded last week, this is another Rider series worked on by an anime director - Gen Urobuchi, most well-known for Puella Magi Madoka Magica. Like that series, Gaim suberts and inverts various Kamen Rider tropes, such as having little to no monsters to fight the Riders with. Instead, the series follows Kouta Kazuraba, among various other Beat Riders as they're called, who compete in a televised dance-battle competition in Zawame City. The dance teams compete for stages throughout the city, and if a stage comes into conflict, they fight with small monsters called Inves. Sounds a LOT more like a certain other popular Japanese property, doesn't it? 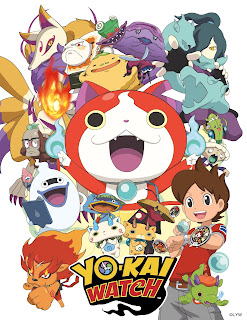 TOTALLY what came to mind first.

Like any series done by Urobuchi (or Urobutcher as some English fans call him), the series is rife with confusion and misinformation (seriously, watch episode 11 of Gaim, it is MESSED UP). Zawame City is built around the headquarters of the Yggdrasil Corporation, who also sponsor the Beat Riders competition...and manufactured the Sengoku Driver...nothing bad can come of this, right? Well, eventually stuff DOES go down, but unlike with some other Kamen Rider series, I can't talk much more about even the beginning of the series without giving a lot away. Let's just say that there's a lot of religious parallels throughout the series. 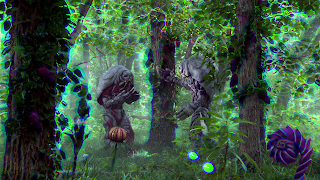 This is their version of the Garden of Eden. Yeah.

The other big comparison between Gaim and Japanese culture is the whole Beat Riders competition in the first place. The teams are fighting for territory and acclaim, eventually by doing away with the dancing and just sending their own Kamen Riders after each other to claim territory. All of this centered around a huge central tower...and the henshin device itself gives us the last piece. The majority of the series is a takeoff of the Warring States era of Japanese history, down to some of the helmets of the Riders looking quite a bit like the historical figures' armor. 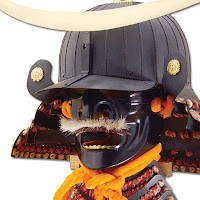 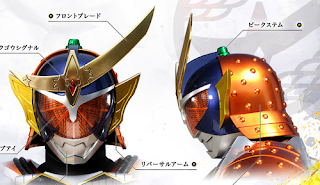 Our main hero's helmet, side by side with  Date Masamune's helmet.

Gaim was a bit strange as far as theming and concepts go - it still stands out amongst Kamen Rider fans as a bit standoffish compared to the series around it. Our next one is a bit less strange, but there's a major change in it that makes it notable...
Posted by SymPhoenix @ 12:57 PM